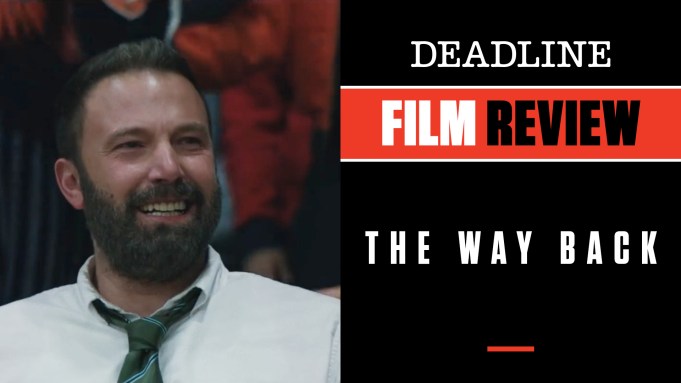 Often art mirrors life, and in the case of the new film The Way Back you get the feeling its star Ben Affleck very much wanted it to. Playing a husband and father whose family is hit by tragedy and who descends into alcohol and denial as a way out of that pain, Affleck gives his best and most authentic performance in years, a real return to his full potential as an actor. And with a movie that reflects perhaps some of his own recent battles with drinking and rehab, as well as the breakup of a marriage, he clearly is bringing some personal experience to the role. That is not to say this is The Ben Affleck Story, or even close, but in some ways he may be using it as therapy of a unique kind most people don’t get to experience.

Jack Cunningham (Affleck) was a basketball star in high school, the king of the court, but a career beyond that in the sport eluded him as life took over including marriage and a family. As the film, which was directed by Gavin O’Connor from a Brad Ingelsby script, slowly reveals,  Jack’s problems with the bottle and inability to stay away from it come from the most agonizing kind of family tragedy, one that tears his marriage apart and sends him deeper into depression.

One day out of the blue he gets an offer from his alma mater to take over as coach of the very team on which he once starred. He is determined to turn it down, but finally after a night of binging on one beer after another agrees to do it. In no time, and in pure underdog, Rocky-like fashion, he has whipped this ragtag team into the kind of shape where they are winning for the first time since Jack himself was the star player. Lest you think this all turns into a virtual remake of Hoosiers, the story takes a turn that is much closer to Leaving Las Vegas, as despite his new success and apparent path on the “way back,” Jack has not completely rid himself of the demons that have nearly destroyed his life. The film’s title takes on a different meaning as he finds a way back into places he — and we — had hoped he had left behind.

This is very much an R-rated movie, not only for the heavy dramatics of its subject matter but also for the language Jack can’t help spewing at his team as they are in the heat of a game, a habit the Catholic high school officials wish he could break. But that’s the least of his problems.

Affleck is terrific in a demanding role that doesn’t try to play off his own history, but one which probably benefits from it in an odd way. He reaches deep into the psyche of a guy who doesn’t know when to stop and is in complete denial. That we have such empathy for his plight is also a tribute to the three-dimensional portrayal Affleck delivers. Props also to a fine supporting cast including Michaela Watkins as his sister, and Janina Gavankar as his ex. Al Madrigal also scores points as his assistant on the team.

The Way Back is refreshing in that even when it appears it might be succumbing to the movie clichés of countless inspirational sports dramas, it surprises us by taking some very dark detours and never compromising what it is really all about. There are no easy answers, as its star well knows, and this film, while hopeful, isn’t about to provide any.

Producers are Jennifer Todd, Gordon Gray, Ravi D. Mehta and O’Connor. Warner Bros will release it on Friday. Check out my video review above with scenes from the film.

Do you plan to see The Way Back? Let us know what you think.