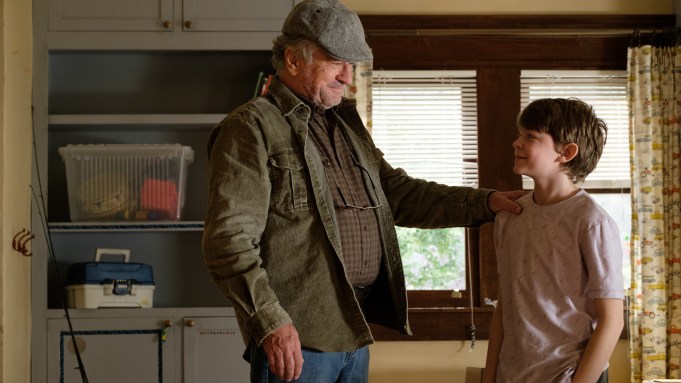 Grandpa moves in and is given the 12-year-old’s room. “Kid, lookit,” Gramps tells the put-upon boy, “I didn’t want it to be this way either.” Relegated to the attic, said preteen sends a missive to the interloper. “Declaration of war: Give me back what is mine or face the consequences.”

Here’s the first trailer for The War with Grandpa, starring Robert De Niro as the patriarch who commandeers the his grandson’s (Oakes Fegley) room. Peter is your average kid, but when he forced to surrender his most prized possession — his bedroom — to his recently widowed granddad the boy devises a series of increasingly elaborate pranks to drive him out. But Grandpa Ed won’t go without a fight, and he recruits his buddies to deploy his vengeful schemes.

Some examples of the mischief/mayhem: Careful with that shaving cream, old man. Beware the collapsing desk, chair and bed, kid. And eyeball that dodgeball, everyone.

101 Studios plans an October 9 theatrical bow for The War with Grandpa. Groove to the Edwin Starr classic “War” the trailer above, and check out the key art below.