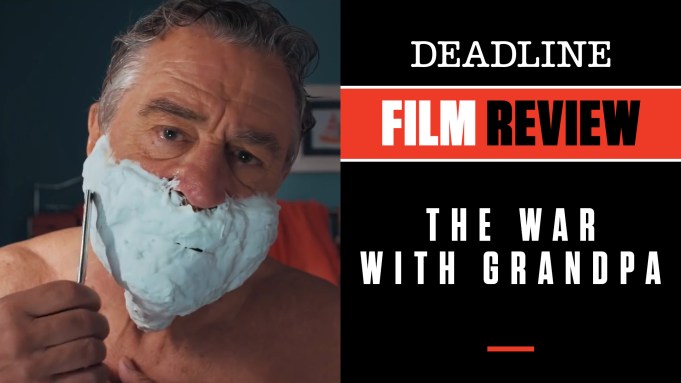 The last time Robert De Niro was the title star in a movie about a grandpa my review headline said: “The Worst Film of Robert De Niro’s Career (Or Anybody Else’s).” That was in 2016, upon the release of the truly dreadful trainwreck called Dirty Grandpa. I am happy to report the grandpa phase of the great actor’s movie stardom thankfully is getting better with age if his latest, the family-targeted The War with Grandpa, is any indication.

No, this isn’t going to be winning De Niro his third Oscar, but the actor really knows how to ground a concept that in lesser hands might have sailed into unwatchable slapstick. That aspect is still there but mostly refrains from going (too far) over the top. This actually is a sweet comedy with some genuine laughs that kids, their parents and grandparents will find in equal doses. The film was shot and intended for release in 2017, a year after the awful R-rated Dirty Grandpa. For this PG-rated outing, our Grandpa Ed also is dirty, but in a far different way: He must battle his grandson Peter (Oakes Fegley), who is put out of his room when Ed is forced to move in with his daughter Sally (Uma Thurman), son-in-law Arthur (Rob Riggle) and their family. Ed has lost his beloved wife, and after a couple of incidents, Sally is concerned that he should not be living on his own. Thus, Peter is shipped upstairs to the attic and none too happy about it. Let the war begin.

With a nod to movies like Home Alone, the comedy derives from several slapsticky sight gags as Peter attempts to make Grandpa’s stay a miserable one — whether it is replacing his shaving cream with plaster, setting a snake loose in his bed or live-wiring the record player as Ed enjoys his nightly jazz. But two can play at this game, and Ed gives as good as he gets, particularly when he rewrites a school essay for an unwitting Peter who shocks himself and his classmates while reading it aloud at school. The two call a truce long enough to set out written rules of war, and all this leads to a couple of big set pieces, one set during a trampoline game of dodgeball between the kids and the seniors, and another at Peter’s sister Jennifer’s (Poppy Gagnon) outdoor Christmas birthday party that turns into a true disaster thanks to some explosive devices the kid has set. The former turns out to be the most fun as De Niro is joined by screen veterans Christopher Walken, Cheech Marin and Jane Seymour in showing off their gymnastic dodgeball skills.

In the end, there is no real rivalry as it is clear both grandfather and grandson have much love for each other, and no one is put in harm’s way, though blowing up Walken’s stint as a party Santa Claus comes close. It is all in good fun, and though it took three years to finally hit the screen, this one from 101 Studios in partnership with Brookdale Studios is getting a wide theatrical release in 2,000-plus theaters starting today. Just that gesture alone, and an ad campaign that celebrates the actual movie-going experience, makes The War with Grandpa worthwhile. A game cast doesn’t hurt, and Fegley thankfully is devoid of any cloying kid actor habits, working nicely opposite a legend like De Niro. With pros like Thurman, Walken and Seymour on hand, the supporting players are better than usual for this type of movie. Teen pop star Laura Marano does nicely as boy-crazy teen daughter Mia and gets a song over the end-credits blooper reel. Based on Robert Kimmel Smith’s popular 1984 kids book, it is a surprise Hollywood took all this time to bring it to the screen, but director Tim Hill (Hop, Alvin and the Chipmunks) and writers Tom J. Astle and Matt Ember have done a nice job doing just that. Producers are Marvin Peart and Rosa Peart.

Check out my video review with scenes from the film at the link above. Do you plan to see The War with Grandpa? Let us know what you think.