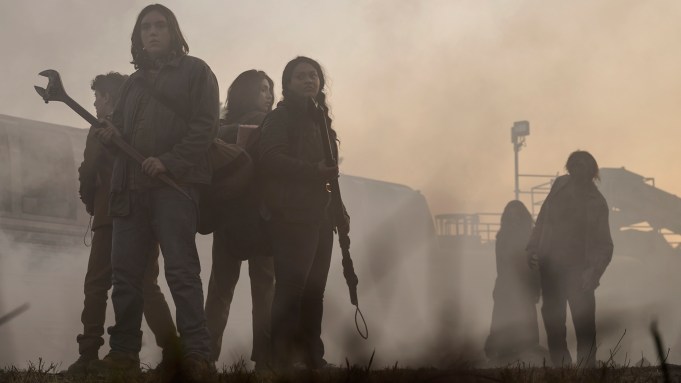 The trailer for the third AMC series in The Walking Dead universe was unveiled Saturday at New York Comic Con. Produced and distributed by AMC Studios, the series will premiere on AMC in spring 2020.

The show’s official synopsis: “The third installment of the franchise will feature two young female protagonists and focus on the first generation to come-of-age in the apocalypse as we know it. Some will become heroes. Some will become villains. In the end, all of them will be changed forever. Grown-up and cemented in their identities, both good and bad.”

The fan reaction in New York on Saturday was thunderous as 1,000-plus fans got their first glimpse of the show’s young ensemble and a sense of the show’s quest-driven story. At the same presentation, the 11th season of The Walking Dead was announced. There’s still no title for the spinoff, though executive producer Robert Kirkman jokingly suggested, “Look Who’s Walking.”

During the panel, Gimple took care to avoid spoilers, but he said the spinoff “begins in the midwest,” a new geographic part of the Walking Dead universe. The story takes place “10 years after the start of the apocalypse,” he said. “This is one of those big things that is happening at the same time as The Walking Dead, but they don’t know about each other.”

The young ensemble of characters “grew up in a place of safety,” Gimple said. “They grew up in a world of walkers but they haven’t really interacted with them. They’ve been behind walls.” Watching them cope with the reality of the apocalypse beyond the walls will be one of the main draws of the show, he added.

The latest spinoff follows in the shambling footsteps of the first spinoff, Fear the Walking Dead, which premiered in August 2015. Also ramping up now: The Walking Dead feature film, starring Andrew Lincoln as Rick Grimes, from AMC with Universal and Kirkman’s Skybound Entertainment.