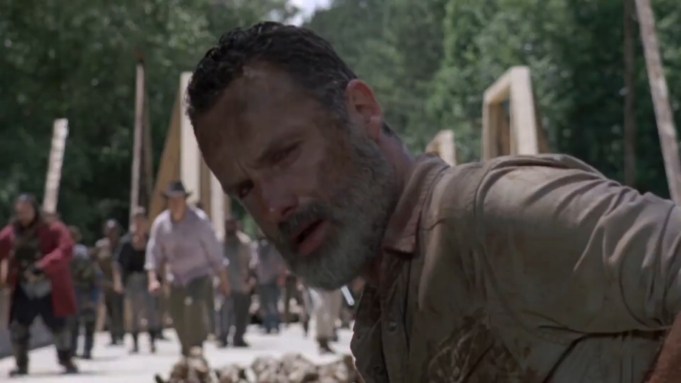 New York Comic Con opened today, and from the banners in the sprawling Javits Center to Saturday’s planned mega-panel at Madison Square Garden, The Walking Dead looms larger than ever at the confab.

Besides still being one of the small screen’s biggest shows, part of its Big Apple presence has to do with the debut of the AMC zombie apocalypse series’ ninth season Sunday, the last day of NYCC. As I say in my video review above, it is a forceful and smart opener to a uncharacteristically optimistic season that will see leads Andrew Lincoln and Lauren Cohan exit and a new showrunner for the series based on Robert Kirkman’s comics in longtime producer Angela Kang.

Today at NYCC, Kirkman kept tight-lipped about the “heartbreaking” manner Lincoln’s character would be leaving the show. However, he did tell anxious fans that he knows “exactly” how the still-alive “Rick Grimes dies in the comic.” The EP added, “It could happen next issue. … It could happen 10 years from now.”

On TWD the TV show, there are still plenty of zombies (or walkers, as the series and the comics call them), action as well as distrust and betrayal as the worst of human nature comes to the fore in what is truly the worst of times. With increasing depth to Norman Reedus’ mainly monosyllabic Daryl and Danai Gurira’s Michonne, under Kang’s strong hand a vision for a show emerges in the early episodes of the new season on an expanding franchise that aims to carry on well past the key cast departures.

Like many TWD fans, I have started the past few season with high hopes, only to find myself exhausted halfway through the season as the show seemed to run out of gas. There are definitely filler moments in the opening of Season 9, but also a shift to the further disintegration of society from the technological age to the horse-and-buggy-and-plow realities of a world plagued. The necessity of that shift provides the impetus for a foray into Washington, DC in the opening episode, “A New Beginning,” and exemplifies a distinct and revitalizing change in tone. Or, put more succinctly by Lincoln’s Grimes, “We’re looking to the past to help us with the future.”

On a NYCC weekend that also sees the powerful Season 3 debut of Amazon’s The Man In The High Castle on Friday and the official premiere of Jodie Whittaker as the 13th Doctor Who on Sunday, The Walking Dead faces more competition that ever before. Nine seasons in, many shows in this era of Peak TV would have truly run out of gas. Self-aware enough, The Walking Dead has turned loss on many levels into a reset and become more insightful than it has been in a long time. That might not be what you expect for Survivors of the end times, but it is something well worth watching.

Click on my video review of The Walking Dead Season 9 above and tell us, will you be watching on Oct. 9?