'This Is Us': How NBC Drama Wrapped The Pearsons' Story After Six Seasons; Dan Fogelman Breaks Down Series Finale; Stars React To End
Read the full story 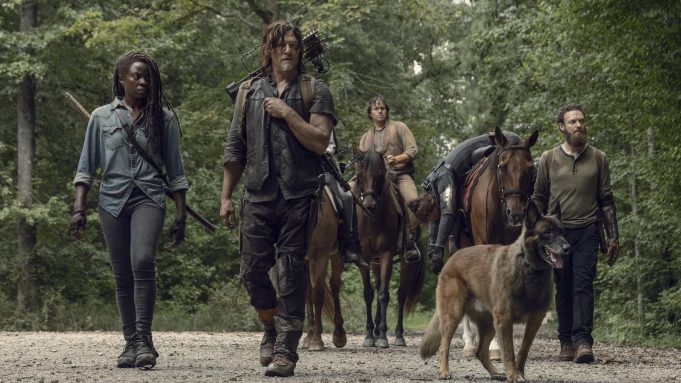 AMC on Friday revealed the Season 10 trailer for The Walking Dead, its flagship zombie apocalypse series that we found out today returns October 6. The unveiling came during the network’s takeover of Hall H at Comic-Con that included Fear the Walking Dead, which was renewed for a sixth season, and some hints about the second franchise spinoff now in the works.

The trailer got plenty of oohs and ahhs in the San Diego Convention Center’s cavernous Hall H. “There is a lot of people losing their sh*t” about Season 10,” star Norman Reedus said onstage. The bit that got the biggest reaction came near the end, hinting at a potential showdown between Melissa McBride’s Carol and Samantha Morton’s Alpha.

Season 10 will also be the final one for Gurira, whose Michonne will appear in only a handful of the new season’s episodes after a deal was revealed in February. She confirmed those details today onstage, getting emotional about the character she has played from the start of the series. The crowd responded with a standing ovation.

Hurd revealed Friday that Thora Birch and Kevin Carroll are joining the cast for the upcoming season.

There’s lots to chew on ahead of Season 10, what with a Season 9 that featured the exits of Andrew Lincoln’s Rick Grimes and Lauren Cohan’s Maggie, along with time jumps in the Kang-overseen partial reset. In the Season 9 finale “The Storm,” most of the Survivors were left reeling from the massacre of “The Calm Before,” as they battled a raging blizzard and splintering divisions – and a mysterious voice that suddenly breaks through the silence.

The Hall H gathering comes amid newsy time in the franchise, which included the surprise final issue of Kirkman’s comic series hitting shelves earlier this month with in an expanded format, complete with a Kirkman essay explaining the end of the run of the comics that first premiered in 2003.

There’s also the new spinoff coming to AMC’s TWD universe. Producers said today that Annet Mahendru and Aliyah Royale have joined Alexa Mansour, Nicolas Cantu and Hal Cumpston int eh the cast of the series set for premiere in 2020. The untitled spinoff will focus on the first generation to come of age in the zombie apocalypse as we know it.

Check out the TWD Season 10 trailer above.