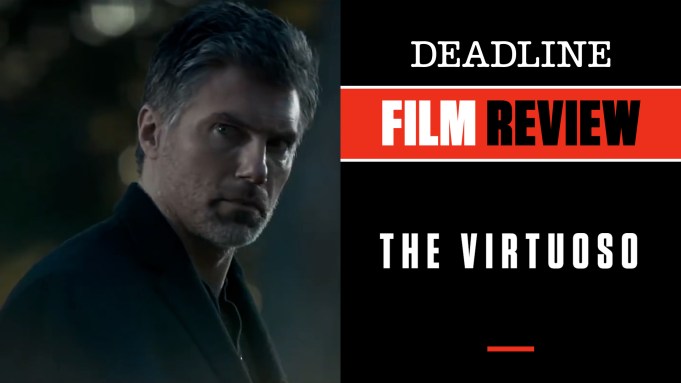 If the noirish hitman drama The Virtuoso weren’t so straight-laced serious about itself, it might make for a good parody of the genre. But despite the brief and much-needed presence of newly minted second-time Oscar winner Anthony Hopkins in a glorified near-cameo, and a game performance from too-often-underrated Abbie Cornish, this feeble effort from producer, director and co-writer (with James Wolf) Nick Stagliano would be instantly forgotten.

Instead, it soon will just be forgotten. It certainly doesn’t live up to the hype of its director’s statement in the press notes; he approaches that writing assignment basically as a glowing review of his own movie.

Stagliano: “The Virtuoso is a modern day film noir, filled with intricacy and ambiguity (not) … a visceral thrill ride with something to say (say what?). It contains everything I love in a movie. There is cinematic style to burn: bold visuals, muted colors, strong performances (one), dynamic compositions and Hitchcockian (Alfred is rolling over in his grave) suspense mixed with Peckinpah violence. But it’s also filled with compelling and unconventional characters (?). A clever (you wish) and gripping story told in an unorthodox manner. And a riveting (ha!) plot filled with moral dilemmas and heartbreaking realities. On a deeper level, the film explores universal themes of identity, guilt and redemption. It examines the fine line between appearance versus reality and fate versus free will … and the horrific cost of them all. As timely today as when the genre was at its peak in the late Forties and Fifties, I want The Virtuoso to be a cinematic hammer to the head and the heart (oy). Filled with jaw-dropping violence, nail-biting suspense and dazzling style … anguished, beautiful and desperately alive.”

OK, here is what it really is, an overly talky story of a one-dimensional hitman known only as The Virtuoso (Star Trek: Discovery’s Anson Mount), who botched his last assignment and hopes to make amends on his cryptically delivered latest task from none other than the mysterious man known only as The Mentor (Hopkins), who — in the only opportunity to get away from his desk — is seen early on delivering a baffling and actor-y 10-minute monologue about his Vietnam days while standing in a cemetery with Mount. After this, our hitman is sent off with only a vague clue — “white rivers” — to identify and kill his assigned target.

Cut to a small town and Rosie’s Diner where, through endless voice-over narration of his every thought and move since the film began we see a collection of characters, one of whom might be able to unlock just what that clue means and be the person he is looking for. But who can it be: The Loner (Eddie Marsan), The Deputy (David Morse), Handsome Johnnie (Richard Brake) or Johnnie’s Girlfriend (Diora Baird)? The only other living soul in the diner is The Waitress (Cornish), whose makeshift nametag identifies her as “Dixi.” This roadside greasy spoon, in pure classic noir fashion, sets up the conundrum for The Virtuoso, as well as the distraction of some emerging sexual tension between him and the lonely waitress stuck in this dead-end town with a dead-end job as she describes it herself.

This all leads The Virtuoso to follow these potential targets, confronting them at various points by shouting “white rivers” in their face and hoping for some recognition before dabbling in a bit of that “Peckinpah violence.” Much of the subsequent action following his visit to Rosie’s revolves around a seedy motel where, among other distractions, The Waitress shows up, clearly horny as hell for what she had (mis)read as a sexual invitation. The scenes with Mount, stuck for most of the film with a thankless way-too-humorless and expressionless character, and Cornish absolutely come alive thanks to her understanding of just who this kind of lonely lady might be. She represents perfect casting, and I can only hope this film serves as an audition for the kinds of roles we don’t get to see her do very often. She’s terrific, particularly in the film’s first two-thirds. Occasionally we cut to shots of Hopkins shuffling about his office or just sitting there with dark glasses on, no doubt an effort to remind us he is still in this movie, albeit almost literally phoning in his performance.

Among the cast, other than the welcome presence of Cornish, the Motel Clerk played by Chris Perfetti is the most amusing, with Perfetti stopping short of Norman Bates territory but delivering a skittish but fun take on just who you might expect would be manning the desk on the late-night shift at such a place. I won’t reveal what Stagliano had in mind in his director’s statement when he refers to “plot twists that will have the audience on the edge of their seats until the stunning surprise climax,” but suffice to say it might not be all that surprising for the sleuths trying to figure out where this is leading.

Production-wise, though obviously shot on a small budget, everything looks the part and Stagliano is a competent filmmaker able to attract good actors — just a director in need of some better material.

Check out my video review at the link above with scenes from the film. Lionsgate releases this in select theatres and on digital platforms tomorrow.

Do you plan to see The Virtuoso? Let us know what you think?