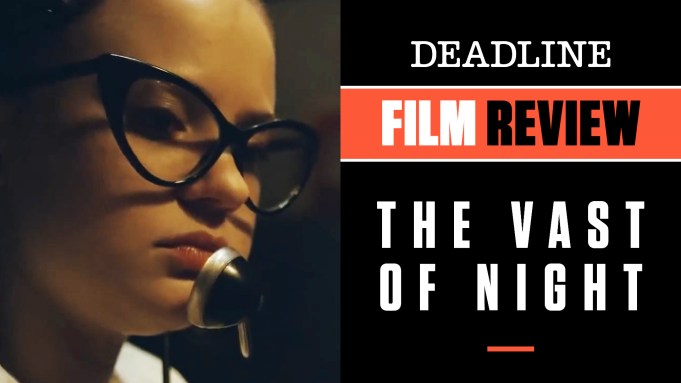 His name is Andrew Patterson. Remember it. On the basis of his first feature film, you are going to be hearing a lot from him.

The movie in question is The Vast of Night, and on the surface of things it would seem to be influenced by everything from The Twilight Zone, Invaders from Mars\ to War of the Worlds and Close Encounters of the Third Kind and every filmmaker from Hitchcock to Spielberg to Demme and others who have dabbled in the world of movies that sparked our imaginations and kept us on the edge of our seats. Patterson is the director who, with screenwriters James Montague and Craig W. Sanger, takes on a story you might think you have seen a few times but gives it such an original spin and style to burn that it not only is thrillingly fresh in its execution but genuinely exciting to watch. You just know you are witnessing a first micro-budget but richly alive work from a future brand-name talent.

Set over the course of a night in a sleepy New Mexico town in the 1950s, the movie starts out in a high school gym and then moves along as two students cross through the streets, their backs to us, carrying on a spirited conversation. Both have night jobs. Fay (Sierra McCormick) works as a switchboard operator, while Everett (Jake Horowitz) is a local radio DJ. Once back at her job, Fay encounters some strange audio frequencies, dropped phone calls and unusual noises and voices including a woman screaming about something going on just outside town. There’s also a recording of a man and a long-forgotten reel-to-reel tape that comes to life warning of eerie otherworldly events. She teams up with Everett to try to make sense of what might be going on.

This sleuthing leads them to Mabel Blanche (Gail Cronauer), an older woman who tries to warn them that what they are experiencing is not new, that she has a personal connection and wants to share it with them. If you know anything about where this kind of tale might be leading, you can imagine that Fay and Everett are about to enter a zone that human beings rarely do. It is not an accident that this film uses a Twilight Zone-like framing device of a black-and-white TV show called Paradox Theatre Hour. It is a clever “wink wink” to just one of the inspirations here.

It is not that the premise or basic plot of The Vast of Night is startlingly new or original. It is not. But the way Patterson approaches it as a filmmaker, his particular choices in trusting the audience to stick with him through long tracking shots, monologues, darkly creepy clues and inventive use of sound design is just part of the reason this movie not only impresses but also sticks with you. On top of that the casting here is just immaculate. Both McCormick and Horowitz prove skilled performers, creating quirky individuals with mounds of dialogue delivered in distinct styles. They are perfectly matched, and both excel here.

McCormick in particular has about a 10-minute scene, focused solely on her as she juggles the strange goings-on at her switchboard, that is astonishing. But That isn’t the most jaw-dropping performance on view. That honor belongs to Cronauer as Mabel, delivering a riveting monologue in one extended scene that you simply cannot turn away from. Her performance is exactly why they created the supporting acting category, small but unforgettable, and if this movie gets seen by the actors branch of the Academy — and by all means, I hope it does — she is deserving of a Best Supporting Actress nomination. I can’t think of another one thus far in 2020 who tops what she does in this film. Another shout-out, while we are at it to the inventive cinematography from M.I. Littin-Menz. Everyone involved in this sharp indie deserves applause.

Producers are Adam Dietrick, Melissa Kirkendall and Montague. Amazon Prime rolls it out beginning Friday. Check out my video review with scenes from the movie at the link above.

Do you plan to see The Vast of Night? Let us know what you think.