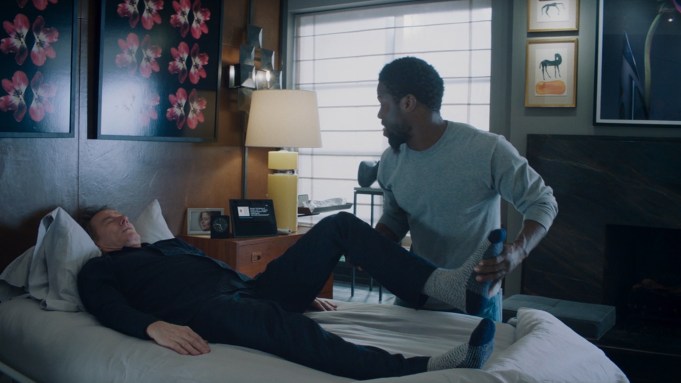 I first saw The Upside at the 2017 Toronto Film Festival. At the party afterwards, Harvey Weinstein, who was the distributor, was lapping up the strong reaction and talking an Oscar/Globe qualifying run for late fall of that year. However, one of the producers told me they thought it was just a commercial play and planned to get The Weinstein Company to stick to the plan of a spring 2018 opening. Well, one month later, things changed, and I probably don’t have to tell you why. After the Weinstein debacle, STX eventually picked up the film and now, after not debuting it in either 2017 or 2018, The Upside is finally is here, tweaked just a bit to get a PG-13 — a better rating for this funny and warmhearted buddy comedy that is saved by the combustible teaming of Kevin Hart and Bryan Cranston.

At its premiere showing at the Roy Thomson Hall in Toronto, the audience reaction to the film was strong, and I expect it to be the same now that it is finally in theaters. Although certainly nothing close to the kind of Oscar contender Weinstein thought he had, it is an amiable and entertaining showcase for the talents of both actors, just as it was in the original 2011 French film The Intouchables, a huge hit on which this English-language version, transported from Paris to Brooklyn, is based.

Director Neil Burger and screenwriter Jon Hartmere have stuck closely to the blueprint laid out by the original French writers, Eric Toledano and Olivier Nakache, with the only real huge difference in the setting and the stars. Hart, thankfully reining in his tendency to mug for the camera and sail over the top, is markedly restrained and real here as Dell, an ex-con who must get a job to placate his parole officer. He stumbles mistakenly into the house of Phillip (Cranston), who is paraplegic (from a hang gliding accident) and is just counting the days until he can leave this world. Still, he is a bit of a prankster and, most likely just to amuse himself, he takes in Dell as a caregiver, a task for which Dell is supremely unqualified.

As in the original, the rest of the film details their budding relationship as each one finds themselves in need of the other and both offer life lessons. In the mix are a number of players — notably Nicole Kidman in a sweet role as Phillip’s key assistant, Aja Naomi King as Dell’s ex, Tate Donovan, Julianna Margulies and others — but this show belongs to the two stars, and they both deliver and play nicely off each other. Cranston, saddled with a role that doesn’t offer the opportunity for much physical movement, does wonders with his eyes and expressions. He and Hart have terrific chemistry here.

This is inspired by a true story about a Parisian man and an Arab, and they are still friends I hear. Doing an update of the original wasn’t really necessary, but as a chance to let Cranston and Hart sink their teeth into this material it is certainly worthy of finding a new audience.

Producers are Todd Black, Jason Blumenthal and Steve Tisch. It opens Friday. Check out my video review above featuring clips from the film.

Do you plan to see The Upside? Let us know what you think.