Continue to Deadline SKIP AD
You will be redirected back to your article in seconds
Skip to main content
April 1, 2021 9:00am 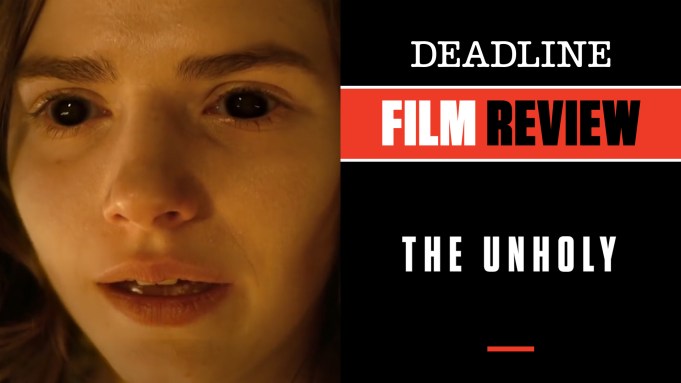 With Peter Rabbit: The Runaway pushed off domestically until July, the next most natural movie for Sony to open for the Easter Weekend is a religious horror flick called The Unholy. Actually it comes from the studio’s lower-budget division Screen Gems, which trades generally in horror and faith-based subjects making this chilling combo of the two (sort of) the perfect opening for the holiday weekend.

Not that this modest genre entry is going to make anyone forget The Exorcist anytime soon. That 1973 classic is the crown jewel of this type of ecclesial fright show, but with Sam Raimi on board as one of its producers, plus source material from British horror author James Herbert’s bestselling book Shrine and some timely new subject matter involving the price of fake news, this familiar but absorbing picture from writer-director Evan Spiliotopoulos manages to succeed more than it has any right to.

Jeffrey Dean Morgan plays Gerry Fenn, a former hotshot journalist whose career took a dive when he was caught making up news. Now a freelancer hawking exploitative stories to supermarket tabloids, he stumbles upon a “miracle” taking place in small-town Banfield, MA. This is a place where — like fabled places Fatima, Lourdes and others — the faithful have witnessed unexplainable religious events.

It all begins with Alice (Cricket Brown), a deaf mute who works with her uncle, Father Hagan (William Sadler), at the local Catholic church. After an encounter she believes to be divine intervention, Alice is suddenly miraculously healed. She then becomes the self-styled conduit for a series of unexplained turns of fortune, including a kid who suddenly gets up from his wheelchair and walks — that kind of thing.

Enter Fenn, who doesn’t know how to explain any of this but senses a money-making story he can sell, that is until a death in the church begins to convince him there are more sinister things afoot. The increasing crowds of believers, Alice’s confidence in her powers, and the slippery Bishop Gyles (Cary Elwes) add to the intrigue as stranger apparitions begin appearing.

An investigator named Delgarde (Diogo Morgado) comes in to check it all out for the Vatican. A kindly town doctor Natalie Gates (Katie Aselton) also gets involved, first as protector of Alice, then as someone who feels there is something very wrong going on. Eventually she becomes a right hand for Fenn when the whole thing goes to hell.

Spiliotopoulos calls this a combo supernatural/journalism thriller and it definitely has elements of both. In many ways it feels déjà vu territory, with elements Hollywood has explored countless times in the past — down to the kind of fire that blew up Elmer Gantry’s pulpit.

Religion, and all its dark crevices, has always been prime fodder for this genre, but with Raimi backing it, and actors of the caliber of Morgan and excellent newcomer Brown selling it for all it’s worth, we are in good hands. Contemporary references to a world that seems to devour fake news over the truth also figure here. For much of its running time the film could even pass as fare for the faith-based crowd, but with a twist that might turn off true believers. Nevertheless others may find spiritual relief, and even potential for a sequel if the faithful flock shows up for this one.

Rob Tapert and Spiliotopoulos also produced with Raimi. Sony opens it on Good Friday. Check out my video review above with scenes from the movie.

Do you plan to see The Unholy? Let us know what you think.