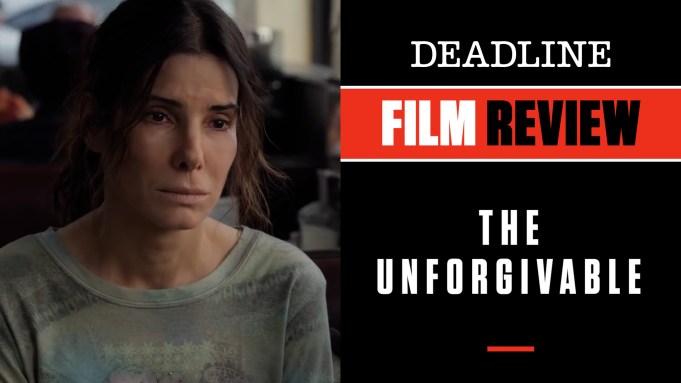 Although her fans love seeing Sandra Bullock in rom-coms, she has proven time and again she is also an exceptionally fine dramatic actor in movies ranging from Gravity to Bird Box to her Oscar-winning turn in The Blind Side. But with her latest, The Unforgivable, she goes places I haven’t seen her attempt before, and the rewards are rich as she takes on the role of a woman just getting out of prison after 20 years for a horrendous crime and trying to start over in a town that is not willing to forgive her past deeds. Based on a British miniseries and now adapted as a stand-alone movie, The Unforgivable provides Bullock an understated role in which there are long stretches where she barely has dialogue, but in her frequent pained silences you know exactly who she is, if not quite how she got there.

As Ruth Slater, Bullock is a woman from a small town living with her much younger sister Katie (Aisling Franciosi) whose life goes on a downward spiral after their father dies, and then further downward when she is convicted of killing a cop in a moment of rage. Handed a hefty prison sentence, she finally gets out for good behavior after two decades, but now is hardened by that necessarily tough and dismal existence. She returns to the town, with no real expectations of renewal but still determined to find and somehow start again with her now much older and estranged sister.

The effect of her return is shown in the film to have distinct impact on a number of locals ranging from the struggling to the wealthy. For Ruth, the verdict remains “unforgivable,” but her life now amounts to one goal: make up for lost time with Katie. The latter (seen most frequently in pre-crime flashbacks) was adopted by loving parents Michael (Richard Thomas) and Rachel Malcolm (Linda Emond), who got a gift when Katie came into their lives after Ruth went to prison but now fear what her return will mean for their family.

Now living in the home where tragedy struck all those years before are the wealthy Ingrams including lawyers John (Vincent D’Onofrio) and his wife Liz (Viola Davis), who have different reactions to say the least when Ruth quietly arrives just to see the house where she and Katie once lived. John is actually compassionate, a strong believer in second chances who perhaps sees in Ruth someone who needs the help he can give. Liz views Ruth from a different perspective and Davis makes sure no words are minced. There is also a wildly different reaction to Ruth’s return from the Whelan brothers, Keith (Tom Guiry) and Steve (Will Pullen), sons of the cop who was murdered, and who see in Ruth’s re-emergence the sad path she caused for their own lives. On a more hopeful note is her budding if tenuous relationship with a co-worker, Blake (Jon Bernthal), at her new job at a fish factory. For much of the film Ruth barely cracks a smile but Blake, against all odds, is a positive influence who tries to help her see some light.

Director Nora Fingscheldt and screenwriters Peter Craig and Hillary Seitz and Courtenay Miles don’t go for the melodrama here but instead, with Bullock fully invested, present a gritty portrait of a woman struggling to find whatever remnant of humanity she once had in what is pretty evident to be a town without much pity. Bullock never misses a beat here and gives the character a lot of breathing room to let us slowly find the human being inside. A virtually lost soul, so much of Ruth is told in the sunken eyes of Bullock, who strips away whatever movie star persona we may associate with her. A bravura turn. It also exciting to see her go toe to toe with Davis, who is taking on a supporting turn but adds fire to every scene she’s in.

The rest of the cast, including a very fine Rob Morgan as Ruth’s parole officer, is up to the game as well. Ultimately this a strong character study and an opportunity to see Bullock further expand her versatility. She also produced the film with Graham King (Bohemian Rhapsody, The Departed, Traffic) and Veronica Ferres.

The Unforgivable opens in select theaters today and begins streaming December 10 on Netflix. It follows the huge success Bullock and Netflix had together with Bird Box.

Check out my video review above with scenes from the film. Do you plan to see The Unforgivable? Let us know what you think.