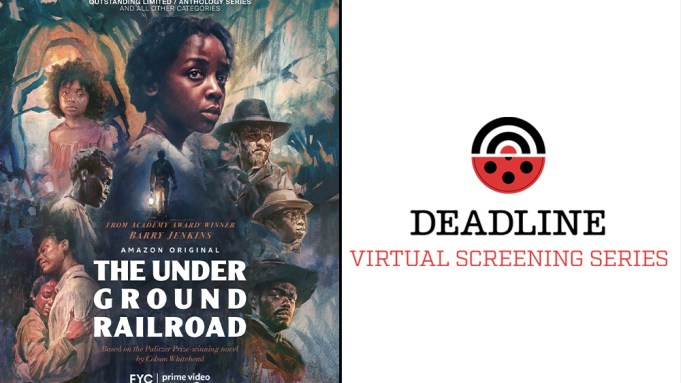 The stars of The Underground Railroad, Amazon’s acclaimed limited series from Oscar winner Barry Jenkins, joined me for Wednesday night’s Deadline Virtual Screening Series. I moderated a discussion with Thuso Mbedu, who plays runaway slave Cora Randall; Joel Edgerton, who plays Ridgeway, the bounty hunter tracking her down; Chase W. Dillon, who plays Homer, the young boy who is his accomplice; Aaron Pierre who plays Caesar, who convinces Cora to join him as they escape the plantation; and Sheila Atim who plays Mabel, Cora’s mother, who she believes abandoned her as a child.

The series is based on the Pulitzer Prize-winning novel by Colson Whitehead and fictionalizes the story of slavery in a way where the Underground Railroad is no mere metaphor but an actual railroad used to carry slaves in the antebellum South to their freedom. Each star had much to say about the importance of this story that, while fictional, is still highly relevant. The series is divided into 10 parts that depict Cora’s different states of mind in the course her journey — something the Mbedu felt was unique and useful. And thanks to the book, she was up to the task.

“We shot a lot of the sequences out of sequence, so working with Barry very closely – and my dialect coach – and preparing for it, one had to be very, very intentional. With each new state, it gives us a glimpse into America’s mentality but also, like, Cora’s psychological state of being, and so, I had to jot and track those moments for myself from beginning to end because every single state meant Cora was a different person emotionally, physically, mentally and vocally,” said Mbedu. “And you know, I appreciated what each episode did because that added to the layer of that fantastical realism, which in itself makes you question if things can jump from place to place like this, what is actually true and what is not, which I think is part of the reason why we’re telling the story. It makes us poke the audience and ask them to reflect and think about what they think they know about the story of [an] enslaved body and what they don’t actually know.”

Edgerton was a little worried about taking on such an unsympathetic role. “I definitely did have a bit of trepidation but all that was abated by the material and that Barry was in charge. I felt like we’re in a really good ensemble led by a really very sure-handed director and artist, and I think what I found interesting is sometimes, I like watching my movies with very clear cut moral lines, and yet, I think with a story like this, it’s worth understanding the mentality of and the engine behind, all the makings of a villain like Ridgeway because otherwise, it would just be very easy to stand back and not engage on a level that connects us with the world we live in today,” he said. “To be able to question what makes a person like Ridgeway and to at least understand, not empathize with, but understand. I think it’s a worthwhile thing to strive for; otherwise, as I say, we stand back and we go, ‘Well, there’s a bad guy. There’s good people and we don’t have to think beyond that.’ The other really interesting challenge goes to the line of understanding the complication, and yet, not asking for anyone to feel sorry for this man, for any reason, if that makes sense.”

Eleven-year-old Dillon not only learned much about the history behind the series while making it, but also praised the camaraderie he had with Edgerton in developing the unusual bond between this white bounty hunter and a Black child who accompanied him throughout their quest to find Cora. Dillon was actually just nine when he started the series, but already was a veteran of three years in the business. “Man, working with Joel was amazing. It was amazing. Me and him have like this very good friendship, kind of, and that friendship chemistry that we have kind of went into our roles a little bit, and so, I see Joel as my big brother, and me and Joel have had very good chemistry on and off set, and we’re just really good friends, and I hope we get to be in another movie together,” he said.

Pierre was proud to be a part of the series, even though he is mainly seen in the first two episodes. “It was a tremendous honor and privilege to be welcomed into this family and to be part of telling this story, and it’s always interesting for me to hear different responses from people who have seen the series about Caesar’s part in Cora’s journey. I think, for me, sort of subjectively, I always put Caesar as one of many catalysts for Cora’s journey but always believed that Cora already had everything that she needed within her to pursue that true liberty and freedom, and already had that burning desire and that burning fire,” he said. “So, if anything, for me, he just contributed, maybe, just a little flame to that already burning fire. And in regards to taking on Caesar, you know, I was definitely nervous. You know, this is a character who was born in Virginia, promised manumission that then, wasn’t granted. He was, you know, sold to the South, separated from his parents…and then we meet him on this plantation in Georgia. And just the thought of having to take on a character with such a magnitude of strength and resilience and mental fortitude was very daunting. But you know, I’m thankful that I had Barry and the incredible team I had around me to assist me and guide me in bringing this character to life.”

Finally virtually all of Atim’s role as Mabel, Cora’s mother, was saved for the final episode and told in flashback. It allows us to finally get some understanding of the woman Cora had always believed deserted her as a child. For Atim it was important to understand who Mabel really was in order to play her at this point in the story. “Ultimately, the story had to boil down to Mabel as a midwife and a mother and actually how those two things intersect, you know, as being a maternal figure. So, she was obviously a maternal figure to her own daughter, Cora, but also to the whole plantation, in a sense, and trying really hard to advocate for people; advocate for Pauly, who is the lady who abuses the child in that tenth episode, trying so hard to hold onto rituals, like actually burying the child, which is something they weren’t really allowed to do. [She’s] trying to make sure that everyone is in good health both physical and mental,” she said. “She really does take on that caregiver role, and so, I think it was about me really stepping into that and then understanding what it takes to get somebody to the point where they’re unable to take on that caregiver role for a split second and what the effects of that is, what the larger ramifications of that are.”

To dive into our conversation and experience portions of it, just click on the link above. The Underground Railroad can be streamed in its entirety on Amazon.