As Packaging Comes To An End Today, Squabbles Over Grandfathered Projects Likely To Continue; Analysis + WGA Q&A
Read the full story
May 27, 2021 10:40am 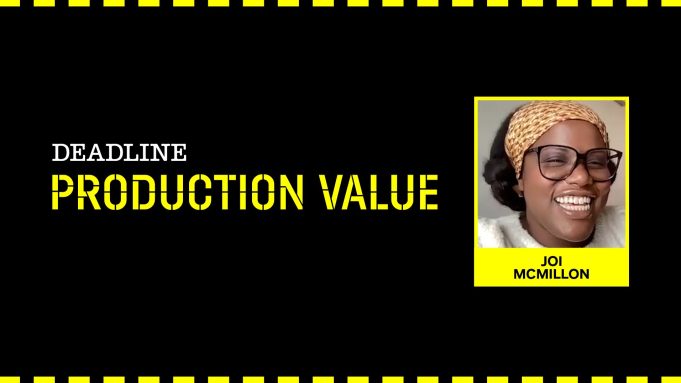 Throughout much of the last two years, editor Joi McMillon’s “days were filled” with work on Barry Jenkins’ Amazon series, The Underground Railroad.

The drama, based on the acclaimed work of historical fiction by Colson Whitehead, was “the biggest project” yet for the pair, on the heels of Moonlight and If Beale Street Could Talk, with McMillon cutting five of 10 episodes. And of course, the task at hand for her felt even more daunting, given that her work was completed amidst the Covid-19 pandemic. Ultimately, what helped her to power through post was recognizing the gravity of the story she was working with Jenkins and others to shape. “This show, I feel like it’s so much bigger than us. It represents so much more,” she says, in the latest installment of Deadline’s Production Value video series. “So, I knew I had to bring my best, day in and day out, because that’s what the story deserves.”

Written, directed and executive produced by Jenkins, The Underground Railroad centers on Cora (Thuso Mbedu), a young woman who makes an amazing discovery during her attempt to break free from slavery in the Deep South.

Interestingly, McMillon—who’d known Jenkins since her film school days at Florida State University—heard about the project long before “the success of Moonlight,” which famously won three Oscars, including Best Picture, in 2017.

Jenkins was the first person to expose McMillon to Whitehead’s writing. But the first book he suggested that she read was actually his 1999 debut novel, The Intuitionist. “I just remember thinking, ‘This is such a unique voice.’ Like, the world that he was creating had so many different layers to it,” McMillon recalls. “I feel like his voice is so distinct and so precise, and has so much imagination that I remember being really, really moved.”

Of course, when McMillon later read The Underground Railroad, it also resonated with incredible power. “I feel like oftentimes when you go back to stories that deal with slavery, there’s almost this feeling of shame,” McMillon says. “The approach that Colson takes to such a really tough time in our nation’s history…He takes such good care of his main character, in a way where at the end of it, you don’t feel defeated.”

The idea of bringing “dignity” to a story often evoking shame resonated personally for McMillon, given experiences she’d had growing up, as one of the only Black kids in the classroom, in a predominantly white neighborhood. “Oftentimes, to have the presentation of what happened to Black people earlier in this country, it was almost embarrassing, and it was this look of pity that people would give to me, to a point where I almost dreaded Black History Month because it wasn’t a time where I was so proud of where I came from,” she shares. “It was a time where it was just like images of us in chains, almost naked. It was just kind of a feeling of dread.”

“So, working on this show,” she continues, “I think Barry and Colson bestowed such dignity to a story that oftentimes is told with a lot of hurt and shame—and I think a lot of people can watch this show and be proud of where we came from.”

One of McMillon’s biggest challenges on Jenkin’s visually stunning, structurally complex and narratively rich series was coming to grips with its particular tone. “I think finding the tone of what the series was actually…happened at the end,” she explains, ” and I’m being literal because I was working on 101 and [series finale] ‘Mabel’ at the same time.”

She did so because the first and last episodes were also being shot at the same time. “It’s kind of crazy to be working at the beginning and the end at the same time,” she admits. “But actually once we focused on ‘Mabel’ and brought that episode together, it was like, ‘Okay, now we understand what the show is about, and we can take what we’ve learned, based on the character development and the tone that we’ve set, and apply that across the board.'”

One of the qualities McMillon most enjoys about Jenkins, as a collaborator, is his willingness to “let the scene and the moment speak to him,” and his adaptability as a storyteller. “He’s never really trying to hold on to what existed on the page,” she says, “and he’s not afraid to get his hands dirty, and to make something better than maybe what it initially started out to be.”

Up next for the editor is Janicza Bravos’ “funny, but also dangerous” A24 feature, Zola, which is scheduled for release in the U.S. on June 30, and an animated Lion King prequel helmed by Jenkins, which is currently in pre-production. “I feel so blessed to be a part of [the project] because it’s a peek into a process that not a lot of people actually have the opportunity to be involved in,” she says. “Every day has been a learning experience, and to see it all come together right in front of us has been awesome.”

During her Production Value interview, McMillon also broke down her earliest creative interests, her first memories of Jenkins from her time at FSU and more. From a young age, she was “always artistically driven,” enjoying drawing and reading—and the novels of John Grisham, in particular. During high school, she “gravitated towards writing” and began to think about pursuing a career as a journalist, before changing course and heading to film school.

At FSU, she met not only Jenkins, but an entire set of collaborators—including producers Mark Ceryak and Adele Romanski, and cinematographer James Laxton—with whom she’s collaborated repeatedly. Down in Tallahassee, she was surprised to be “immediately dropped into the experience” of filmmaking, and learned about a range of craft areas. Some of her most vivid memories are associated with thesis film shoots she’d work on during the summers. “Tallahassee, I don’t know if a lot of people know this, but it’s the hottest and coldest place in Florida. So, those summers were brutal,” she says. “But during the process, I think you became really close with your collaborators. I think something about that experience definitely influenced how close we are today.”

When McMillon first met Jenkins, she recalls, “it wasn’t like an instantaneous, ‘We’re going to work together forever’ type situation.”

Truthfully, she says, Jenkins “is a very quiet observer” who takes time to get to know people before he opens up. “I remember one time…I picked him up and we were going to film school, and I just was talking, talking, talking. He looked at me and said, ‘You know what Joy? It’s okay to sit in silence. We’re friends,'” she recalls, laughing. “It’s so funny. That was so long ago, but that moment always stuck with me.”

Ultimately, the relationship shared between Jenkins, McMillons and their collaborators would take all of their careers into the stratosphere. (In 2017, McMillon became the first African-American woman ever nominated for a Best Editing Oscar, with Moonlight.) But her experience starting out in her career was much less glamorous. Her very first credits as an assistant editor were in the realm of reality TV, on shows like The Biggest Loser. As McMillon explains, it was never her intention to get into this area of entertainment, but “in order to get into the Motion Picture Editors Guild, you have to do a hundred days of non-union work, and most people will find those hundred days in reality television.”

For McMillon, the goal was always to get into cutting features. Therefore, she left reality behind, just as she was about to be bumped up to the role of editor. “To transition from reality to scripted is very, very tricky,” she notes, “and oftentimes, a lot of people won’t take a chance on you because you don’t have any scripted experience.” Fortunately, her first big break into the scripted arena did come along, via The Sarah Silverman Program. Then, she was able to make her way into features, taking a demotion to apprentice editor on the Don Cheadler-starrer Talk to Me, just for a chance to cut her teeth in features. “I look back on that and remember Terry [Shopshire] and Kasi [Lemmons], a Black female editor, a Black female director, and I was like, ‘This is going to be my life in the industry,'” she shares. “And then I never had that again.”

In retrospect, the biggest challenge in making the leap from reality TV to features was learning how to navigate “the politics” of a feature cutting room. “In reality television, I think everyone is just moving at such a fast pace to get the show made. Once you’re starting to work on studio features, there is a hierarchy of who’s included, and who gets to see the film, who doesn’t get to see the film, how you need to act if someone enters the cutting room,” she shares. “There’s a whole etiquette to that area of the industry that doesn’t really exist in reality television, and also just the formality of how you present yourself, and how you’re representing the film.”

As the assistant editor, she explains, “you’re usually the person who’s going down and bringing up the producers or…the actors, so you are representing the film.”

At this point, McMillon is almost two decades into her professional career, and she’s made a point of sharing these critical lessons about etiquette with the assistant editors who are working under her, while offering other guidance. “I can’t say how many Black female editors [have] been in this position, like I am, and that’s not lost on me,” she says. “So I feel like, as cool as that is, there’s a responsibility to say, ‘Yes, there’s a way there’s a path to get here, and I don’t have to be the only one. There can be others.’”

The Underground Railroad is currently streaming on Prime Video. Check out our conversation with McMillon above.