Continue to Deadline SKIP AD
You will be redirected back to your article in seconds
Skip to main content
November 5, 2019 6:52am 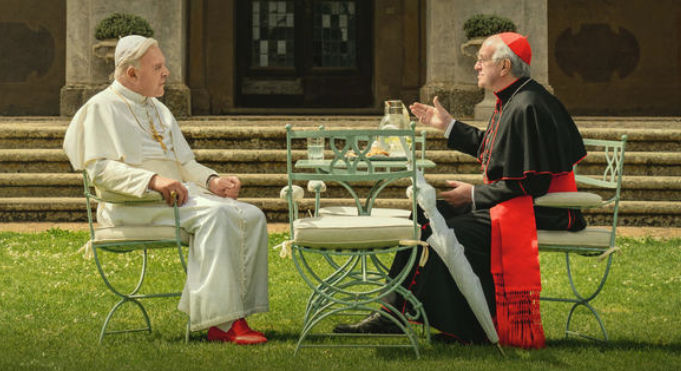 Netflix’s The Two Popes, from director Fernando Meirelles and starring Jonathan Pryce and Anthony Hopkins, has been making the rounds of the festival circuit, winning awards (including the Audience Award for Best Narrative Feature, Hamptons Film Festival) and today the streamer is giving non-fest-goers a chance to see what the fuss was about.

Inspired by true events – you can decide on how to interpret that “inspired” – The Two Popes (not to be confused with HBO’s The New Pope) is described by Netflix thusly: “…an intimate story of one of the most dramatic transitions of power in the last 2,000 years. Frustrated with the direction of the church, Cardinal Bergoglio (Jonathan Pryce) requests permission to retire in 2012 from Pope Benedict (Anthony Hopkins). Instead, facing scandal and self-doubt, the introspective Pope Benedict summons his harshest critic and future successor to Rome to reveal a secret that would shake the foundations of the Catholic Church. Behind Vatican walls, a struggle commences between both tradition and progress, guilt and forgiveness, as these two very different men confront elements from their pasts in order to find common ground and forge a future for a billion followers around the world.”

What we learn in the trailer is that ground-shaking confidential church documents about corruption have been leaked to the press.

Of course, we also get to see two of our greatest actors go head to head, which alone makes this trailer a must-watch.

Netflix’s The Two Popes hits theaters on November 27 and then on Netflix December 20.