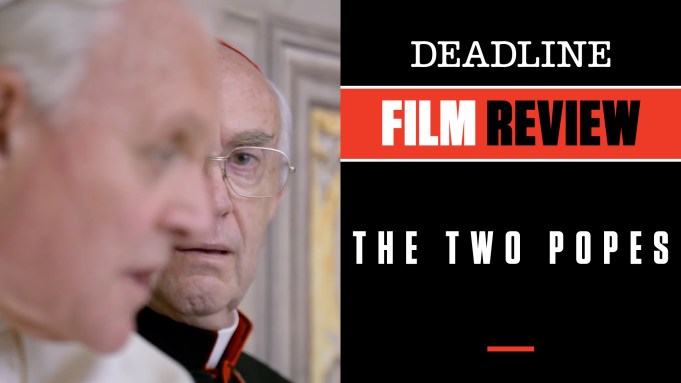 We have waited 700 years to live in a time when there are two popes alive at the same moment, but because this unique event has given way to a beguiling new film about the intersection between Popes Benedict and Francis, as imagined by screenwriter Anthony McCarten and director Fernando Mereilles, it has been well worth the wait. An audience favorite at every festival it has hit since debuting at Telluride over Labor Day weekend, this inspiring, moving, intelligent and surprisingly funny movie will warm your heart and give you religion.

Well, the religion that comes from a witty and thought-provoking script that imagines the conversations between Pope Benedict (Anthony Hopkins) and Cardinal Bergoglio (Jonathan Pryce) as the cardinal requests a meeting with the pope in 2012 to submit his resignation. It is more difficult than he thought because the pope, facing scandals and other issues, decides to confide in the man who might be his chief critic in the Vatican that he plans to step down — an unheard-of event in seven centuries. It becomes a meeting of two very different minds, and the film is full of surprises.

The film itself has much more on its mind than just these conversations that take place first at Benedict’s retreat, then at the Vatican and even in the Sistine Chapel (brilliantly re-created on a soundstage at Cinecitta in Rome). It is as timely and pertinent to today with the increasing divide in the world among factions that see things only their way — between progressives, represented by Francis, and conservatives represented by Benedict. It is meant to show that the answer might be in coming right down the middle and finding communion. McCarten recently told me in an interview that he feels dialogue-driven scenes can be just as exciting to audiences as car chases, and he proves it in the banter he has, by necessity, invented for this movie.

Francis and Benedict were known to have met at least three times, but of course the content of those conversations is not known. McCarten has had to imagine what was said, but it was all written after extensive research and knowledge of their views. What he has accomplished with this literate, knowing and dazzling screenplay is nothing short of a miracle. But it is all accomplished without ever becoming grounded like a stage play, with two old men talking to each other for two hours. This script is too smart for that, and Mereilles is too great a director to let it happen. This is brilliantly cinematic. The words spoken by two of the greatest living actors in the English language, — both from Wales — are thrilling to listen to, and the director uses expert camera work to make it all so visually splendid.

The second half contains many flashbacks to Bergoglio’s native Argentina, where we get to see what informed the man he would become, and then spiraling into personal crisis during a military intervention he feels he failed to do anything about. Juan Minujin is very fine portraying the younger Bergoglio, and Mereilles uses handheld cameras in this section that establishes a grittier look that is more reminiscent of past films he has made like the masterful City of God. The juxtaposition between time periods is effortlessly handled and gives extra layers to Bergoglio’s own self-doubts about even being in the church anymore, much less as a potential future pope.

Hopkins and Pryce are as good as it gets, and the ecclesial pingpong match of ideas between them is not only wildly entertaining and engrossing, it is at some points downright hilarious. This is especially true in seeing the human side of both men. Benedict plays the piano, talks about the Beatles and loves watching a TV show called Kommisar Rex in which a German shepherd solves crimes. Bergoglio, on the other hand, in a big Argentinian soccer fan we soon learn, and he also loves ABBA. There is even a delightful scene where he tries to teach Benedict the tango.

The fact that none of this comes off as shtick is a tribute to its stars, its director and its writer. First and foremost this is a supremely smart and winning movie that will bring you laughs, tears and perhaps best of all, a new way to look at the world. It will indeed give you religion, however you may define it. I was captivated.

Producers are Jonathan Eirich, Dan Lin and Tracey Seaward. Netflix puts it in theatrical release on Wednesday before it begins streaming later in December, a perfect holiday treat. Check out my video review at the link above with scenes from the film.

Do you plan to see The Two Popes? Let us know what you think.