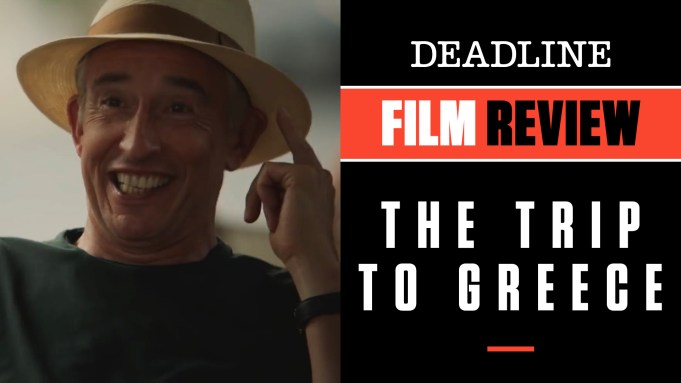 The good news is British comedy stars Steve Coogan and Rob Brydon are still traveling together, eating great meals and trading wickedly funny impressions of actors. The bad news is they say this fourth go-round in the Trip series is their last. Say it ain’t so.

These acidly witty and fun excuses for the pair to travel around Europe have become a welcome diversion during the past decade in The Trip (set in England), The Trip to Italy, The Trip to Spain, and now we have The Trip to Greece. All these movies are distillations of each one of the BBC’s six-episode series and double as travelogues and comic swordplay as Brydon and Coogan trade barbs while dining out at some of Europe’s most mouth-watering establishments.

This time they have decided to follow the path of Odysseus, and it is a picaresque one indeed. There’s never much plot in these adventures, as they are used to show off Coogan’s and Brydon’s adeptness at impersonations, the all-time best being their Michael Caines. This time I have to say the highlight is their individual take on Dustin Hoffman, in particular the famous dental scene with Laurence Olivier in Marathon Man. Hilarious. There is also a riff on Coogan’s BAFTA-nominated — he is the first to tell you that — performance as Stan Laurel in the biopic Stan & Ollie. In this case, they turn it into Laurel and (Tom) Hardy routine for some funny moments.

There are many others including an encore of Mick Jagger, tough guy Ray Winstone and on and on as they stop at one restaurant after another or drive along the countryside singing songs like “Grease” — well, you get the idea. As usual, director Michael Winterbottom guides this journey behind the camera, and it all is guaranteed to make you feel like you are on an idyllic vacation with these two as your companions. This is just perfect timing for those looking for an escape from coronavirus quarantine cabin fever.

Interestingly, this Trip turns a little darker with the increasing guilt on the part of Coogan as he hears his father has taken ill. Thus there are phone calls shown with his son giving him updates until the movie takes a turn and he is dealing with the very real issues of life. It actually is pretty brave considering the frothy tone of the rest of this enterprise, but for the most part, The Trip to Greece is meant as sheer entertainment. The abrupt shift of tone might have more to do with the challenge of editing six one-hour TV episodes into a cohesive movie, but Winterbottom does as well as he can given the circumstances. By the way, this is the second Greece-set film for Coogan and Winterbottom this year as they also used Grecian locations for Greed.

IFC Films takes this intended specialty theatrical release straight to VOD on Friday, and considering it originally was designed for TV anyway, the loss of theaters doesn’t make a huge difference here. Here’s hoping this isn’t the end of the road for these two.

Producers are Josh Hyams and Melissa Parmenter. Check out my video review with scenes from the movie at the link above.

Do you plan to see The Trip to Greece? Let us know what you think.