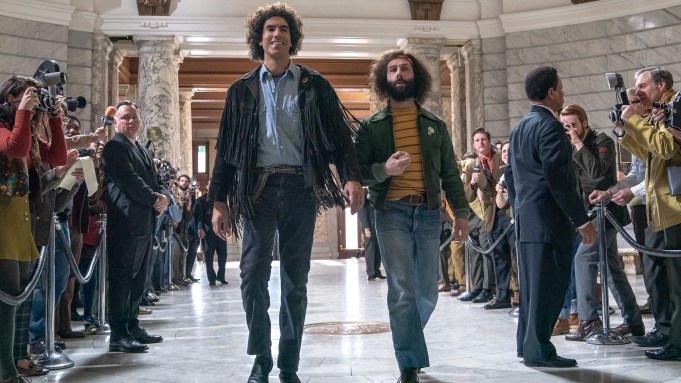 Sunday night’s L.A. Rams-Dallas Cowboys football game played host to the first trailer for Aaron Sorkin’s forthcoming political drama The Trial of the Chicago 7. The film, which is based on the true story of the historic clash between peaceful protestors and authorities during the 1968 Democratic National Convention, debuts on the streaming giant on October 16.

The first trailer is woven with bits and pieces of this story that made history as the world watched. It definitely has those signature Sorkin storytelling vibes as it paints a tense portrait of the aforementioned clash — which is as timely back then as it is now. Written and directed by Sorkin, a peaceful protest was set to take place a the 1968 DNC and it quickly turned into a confrontation between the protestors and police and the National Guard. The organizers of the protest — including Abbie Hoffman, Jerry Rubin, Tom Hayden and Bobby Seale — were charged with conspiracy to incite a riot and the trial that followed was one of the most notorious in history.

Originally set to debut in theaters pre-COVID, Netflix picked up the pic from Cross Creek. Paramount, which first had distribution rights to the movie, initially planned a limited debut on September 25, then an expansion on October 9 before going wide of October 16. The debut is one of many relevant films that are timed with the forthcoming U.S. presidential election in November.