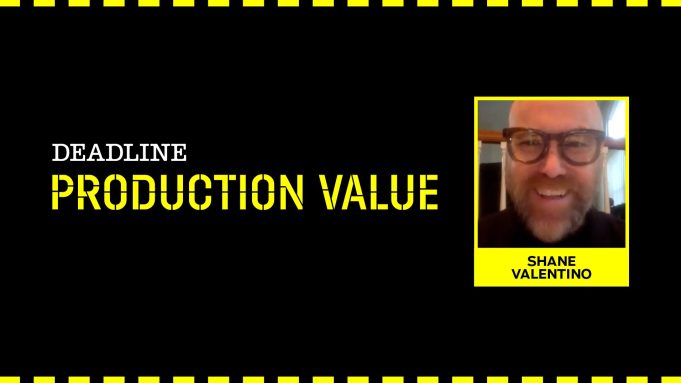 Heading into The Trial of the Chicago 7, production designer Shane Valentino had only around eight weeks of prep to solidify a visual approach, diving into historical research, while contemplating creative and logistical challenges, including large-scale riot scenes.

Written and directed by Aaron Sorkin, the Golden Globe-nominated drama tells the story of the Chicago 7, a group of anti-Vietnam War protestors who were hit with conspiracy charges, after riots broke out at the 1968 Democratic National Convention. Enduring a trial presided over by a hostile judge, the countercultural icons nonetheless doggedly pursued justice, united in their mission to speak out against a corrupt and unfair government.

In the latest installment of Deadline’s Production Value video series, Valentino notes that being limited to two months of prep is “ridiculous,” in the context of a period piece. At the same time, his efforts to prepare for the film in this time frame were supported by the fact that the film had almost been made several times before. “I had the benefit of a tremendous amount of research that was done by previous productions, in preparation for the film,” he says. “I think [production designer] Rick Carter was involved in the first iteration with Steven Spielberg in 2007, and then we had other iterations, where they had this tremendous amount of photographic research.”

With this foundation in place, the look of Trial would then be shaped by every minute choice that Valentino made—perhaps most notably, with regard to its Chicago riot scenes. While the budgetary requirements in staging these moments had stalled previous efforts to mount the film, Valentino was able to help Sorkin through them, given his experience with similar scenes on Straight Outta Compton. “I think the LA riots scene is only like a quarter of a page, or an eighth of a page, but we really wanted to show what an impact that moment had in the history of Los Angeles,” the production designer recalls. “We didn’t have a lot of time, and we didn’t have a lot of money, and I think it was more about our approach to how to show that moment in time, without relying on found footage.”

While it would be tricky to stage his own riot scenes on real Chicago streets, Sorkin hoped to take a similar tack. The trick, says Valentino, is “you use your environment as a great sort of blind, to [only] show as much as you need to see, so the set in which we had to create didn’t have to be that large.”

Given the fact that Trial is much more focused on courtroom drama than on police conflict, riots would only be depicted in this case in flashbacks. Therefore, it felt organic to offer up a more controlled presentation of chaos on the streets, hitting only on iconic Chicago landmarks and very specific story beats. “We could get away with almost showing 180 of the world, as opposed to 360, and I think that was the technique that we applied to make it cinematic, meaning bigger than our own individual lives,” Valentino explains. “I think that’s what the power of cinema is, in some ways: It transports us.”

While riot scenes were realized in Chicago—in concert with DP Phedon Papamichael, who used smoke to further control what was in frame—the production would head to New Jersey for many other moments, including those taking place at the courthouse, where the Chicago 7 faced trial. Here—just as in Chicago—it was crucial to accentuate period details that would sell the reality of the film.  “I think the challenge for me often is convincing producers that the things I think are important to change are important to change, because I think they work for the viewer in an unconscious way,” he says. “It’s like, the sash locks have to be correct, and the doorknobs have to be correct, because they’re just these subtle, small things that your brain will pick up on if it doesn’t feel right.”

Boasting other credits including House of Lies, The Normal Heart and Nocturnal Animals, Valentino’s education in film began at a young age, at Crossroads School in Santa Monica. “I got introduced to film theory and criticism at the age of like 14,” he recalls. “I had an incredible teacher who really taught in the Socratic method, and treated all of the students as if we were equals.”

After graduating from high school, he studied under the “fabulous filmmaker” Chick Strand at Occidental College, going on to earn a master’s degree at the San Francisco Art Institute. “I got it in film, as a fine art, and was mostly curious about film, as an installation,” he says, “and I think that that was the segue that got me into production design, unconsciously.”

Subsequently, he moved to New York, and while “just trying to survive,” he landed a job on the set of The Isaac Mizrahi Show, where he was able to cut his teeth as an artist, finding that production design really did capture every one of his interests. “It captured my interests in sculpture, and painting, and photography, and obviously filmmaking,” he says, “and so all of that education that I received, from when I was 14 to in my mid-20s, really made a difference.”

Eventually, Valentino would find a friend and business partner in production designer Nathan Crowley—the five-time Oscar nominee behind such films as The Dark Knight and Tenet—working under him as an art director, until he could solidify his place as a production designer.

In this respect, he’d find his big break on Mike Mills’ father-son drama, Beginners. “That was really a transformative experience in film, by itself,” he says. “I still think, actually, that’s one of my finest moments.”

Consistently finding excitement in his craft, as he sets out to conceptualize the look for a new project, Valentino finds it to be “a phenomenal art form,” because each project presents its own world, and calls for its own visual approach. At the same time, there are countless ways of “curating and distilling down these ideas,” meaning that no two production designers would approach a project the same way.

“That’s why I am constantly excited and curious about it. It’s always asking me to look into things that are maybe outside of my comfort zone, and that’s also exciting,” he says. “I’m constantly being asked to be a student, and I love it.”

For more from our conversation with Valentino, take a look at the video above.