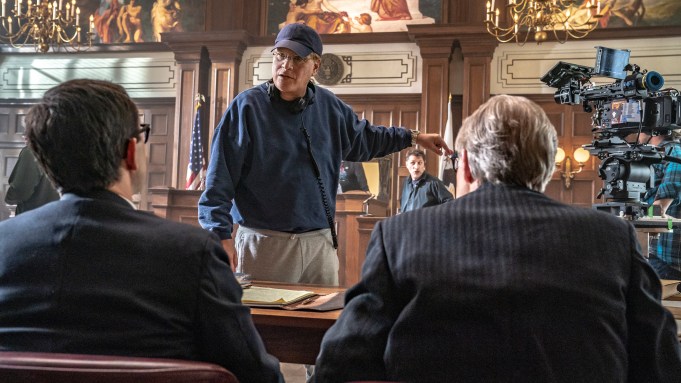 EXCLUSIVE: The Trial of Chicago 7 writer-director Aaron Sorkin takes us behind the scenes of his Oscar-buzzed Netflix drama to spotlight the impressive roster of actors that brought this film to life.

In the video above, Sorkin is joined by stars Sacha Baron Cohen, Eddie Redmayne, Yahya Abdul Mateen II, Joseph Gordon Levitt, Jeremy Strong, John Carroll Lynch and Frank Langella as they talk about working as an ensemble in a film that is all-too-relevant for today’s social and political landscape.

Based on a true story, Trial of the Chicago 7 dramatizes the events of the 1968 Democratic National Convention, which started off as a peaceful protest but unraveled into a violent clash with police and the National Guard. The organizers of the protest—including Abbie Hoffman, Jerry Rubin, Tom Hayden and Bobby Seale—were charged with conspiracy to incite a riot and the trial that followed was one of the most notorious in history.

Mark Rylance, Michael Keaton, Alex Sharp, Kelvin Harrison Jr., Caitlin Fitzgerald, Alice Kremelberg and Ben Shenkman round out the cast, which will be giving the Ensemble Tribute at next month’s IFP Gotham Awards. IFP describes the new award as honoring “the performances of a group of dynamic and noteworthy cast onscreen and celebrate their collective effort and contributions to the film’s narrative.”

The Trial of the Chicago 7 hit theaters for a limited stretch in September and bowed on Netflix on October 16.