Continue to Deadline SKIP AD
You will be redirected back to your article in seconds
Skip to main content
September 21, 2021 6:00am 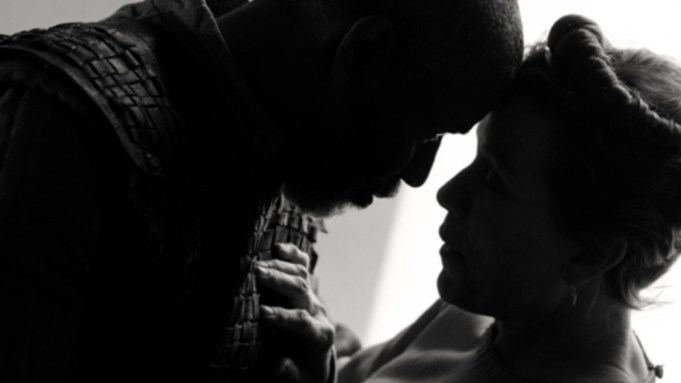 “By the pricking of my thumbs, something wicked this way comes.”

Those are the words heard in the the first teaser for The Tragedy of Macbeth. In Joel Coen’s movie for Apple TV+ and A24, Denzel Washington and Frances McDormand take on one of Shakespeare’s most villainous couples: Lord and Lady Macbeth.

For those unfamiliar, the play follows Macbeth, a general who receives a prophecy that he will soon be King of Scotland. Through his thoughtless ambition, and hardcore gaslighting from his wife, he eventually seizes the crown from the current King Duncan. However, his tenure as supreme ruler is never peaceful, and all hell breaks loose as his guilt outweighs the act of becoming King.

The film is set in a hazy black and white. There is no dialogue in the trailer beyond the spoken quote from the play, but it does show glimpses of some of the film’s most important characters. It first begins with Macbeth (Washington) and his closest confidant Banquo (Bertie Carvel) approaching the three witches known as the Weird Sisters.

The camera angles are tight, so it’s hard to get a good look at the setting. It does look like it could have been shot on a large stage or on an outdoor set. If the former is the case, this won’t be the first time Macbeth is filmed this way. Sir Ian McKellen and Dame Judi Dench starred in a similarly lensed version of the play from the Royal Shakespeare Company which made it to television in 1979. In it, the actors moved through elaborate sets on a soundstage—shot with cinematic style and flair.

Until now, any specific details surrounding Coen’s film have been scarce, and the teaser doesn’t give many details but offers just enough to create buzz about the upcoming movie.

Apple TV+ and A24’s The Tragedy of Macbeth will have its world premiere at the 59th annual New York Film Festival on September 24. Check out the teaser above.