Late-Night Shows Win Back Their Fifth Emmy Nom Slot After Showrunner Campaign
Read the full story
May 26, 2021 8:20am 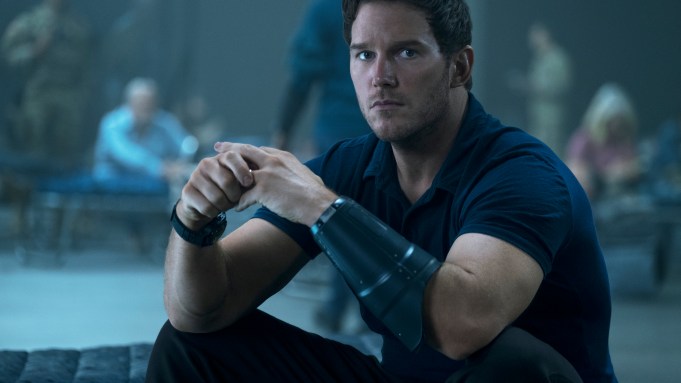 Amazon Studios on Wednesday released the official trailer for The Tomorrow War, the big-budget sci-fi action pic that stars Chris Pratt and is directed by Chris McKay. It will hit the Prime Video streaming service on July 2.

Written by Zach Dean, the plot centers on what happens when a group of time travelers arrive from the year 2051 to deliver an urgent message to Earth: Thirty years in the future, mankind is losing a global war against a deadly alien species. The only hope for survival is for soldiers and civilians from the present to be transported to the future and join the fight.

Cue high school teacher (and ex-military man) Dan Forester (Pratt), who, determined to save the world for his young daughter, teams with a brilliant scientist (Yvonne Strahovski) and his estranged father (J.K. Simmons) in a quest to rewrite the fate of the planet. Betty Gilpin, Sam Richardson, Edwin Hodge, Jasmine Mathews, Ryan Kiera Armstrong and Keith Powers also star in the pic.

The Skydance production — originally set up at Paramount before moving to Amazon earlier this year in a big $200 million deal when the theatrical business was in flux because of the pandemic — is produced by David Ellison, Dana Goldberg, Don Granger, Jules Daly, David Goyer and Adam Kolbrenner. Executive producers are Rob Cowan, Chris Pratt, Brian Oliver and Bradley J. Fischer.