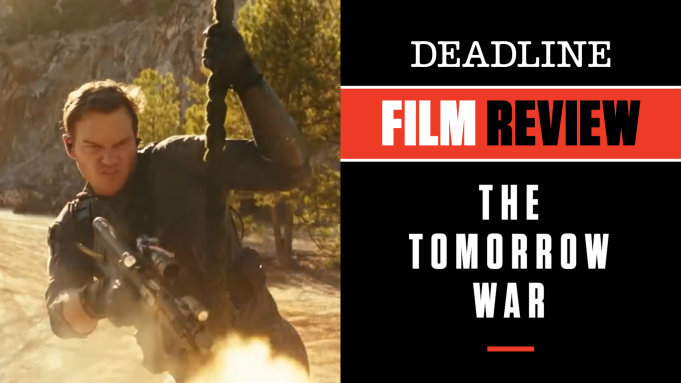 So you have an A-List star in Chris Pratt known for leading such blockbuster tentpoles as Guardian of the Galaxy and Jurassic World. You have the combined forces Paramount, Skydance, and Amazon. You have expensive and relentless CGI and Visual Effects. You have a supporting cast with Oscar and Emmy winners. And you have hundreds, maybe thousands, of gross-looking alien creatures out to finish off humanity.

Now if that isn’t the recipe for a popcorn-chomping summer box office spectacular, what is? The answer, perplexingly, is apparently Paramount got scared off by the pandemic more than aliens and — like Eddie Murphy’s Coming 2 America in March — shuffled this one off to Amazon Prime, where The Tomorrow War will debut Friday to the delight of streaming customers rather than exhibitors, who might have relished having this one as an escape from the prevailing heat waves hitting the country this holiday weekend. Guess you will have to make that popcorn at home, folks, and watch this on the biggest TV with the loudest sound system you can find.

As these man-vs.-human-munching-alien-creature movies go, this one from director Chris McKay and writer Zach Dean is fairly entertaining, if a little repetitive and unimaginative in the big battle showdowns with multitudes of attacking overgrown-iguana-like monsters desperately in need of dental work. However, the domestic strife and long-gestating resentment between father and daughter also is a bit much, especially when the showdown over Daddy’s shortcomings as a father come to a head in a brief quiet moment when father and daughter have a “talk” about lingering grievances. But it’s complicated.

Pratt is Dan Forester, a high school teacher living a seemingly nice suburban existence with wife Emmy (Betty Gilpin) and daughter Muri (Ryan Kiera Armstrong) circa 2021. All is fine, it seems, until, during a party at the Foresters’ where everyone is watching a televised soccer game, the action on the field suddenly gets weird. A large force of combat-geared humans ascends from the skies and takes over the telecast with an urgent plea to 2021 citizens to come to the future — specifically 2051, where they have time-traveled from — and join them in the ultimate fight to save what is left of humanity in a post-apocalyptic environment where human forces are fighting off swarms of powerful creatures out to do in anyone still living.

It seems the entire world is united as one in the quest to save ourselves.

‘The Tomorrow War’ Trailer: Chris Pratt Is Drafted To Save The World

The draft is on, and Dan — along with fellow patriots Charlie (a fun Sam Richardson), Dorian (Edwin Hodge), Norah (Mary Lynn-Rajskub) and Cowan (Mike Mitchell) — soon are enlisted and dropped (literally) into a frightening Miami Beach of 2051. Poor Florida. With all the real-life tragedy going on there now, the movies also have been giving the state a hard time, first the attack by Godzilla earlier this year and now aliens.

The usual non-stop mayhem progresses as this ragtag team from the past joins others to save the future. Key to this is Romeo Commando (Yvonne Strahovski), a brilliant military scientist who might hold the key to how to wipe out the aliens, and even do it back in 2021 so this catastrophe might never have occurred. Dan meets her and slowly realizes during their initial conversation that she is familiar. If you guessed she is his daughter Muri, now 30 years older, you would be right.

Although it gets a little hard to swallow story-wise, the action is so pervasive you won’t have time to think about the absurdity of it all. Pratt doesn’t get to do his quippy usual stuff in this kind of blockbuster-type pic, essentially playing it straight, which is a tad disappointing. But his showdown with one particularly fearsome alien — their goal was to catch and corral one of them in order to lead to whole expiration of all of them — is exciting and a man-vs.-monster showdown that rocks. This should have been for the big screen, not just big-screen TV sets.

Producers are David Ellison, Jules Daly, Don Granger, Bradley J. Fischer, David S. Goyer and Adam Kolbrenner. Check out my video review with scenes from the movie at the link above.

Do you plan to see The Tomorrow War? Let us know what you think.