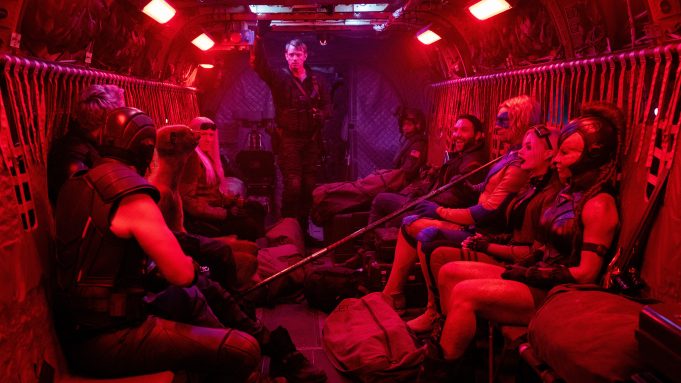 Behold the first trailer for Warner Bros’ James Gunn-directed DC sequel The Suicide Squad, which has all the trademarks of the Guardians of the Galaxy filmmaker from a great retro hit single (Steely Dan’s “Dirty Work”) to bantering superheroes — only bawdier, as underscored by the red-band label.

The film isn’t rated R (yet), but we hear the screenplay by Gunn definitely leaned heavily toward that rating, and you can see some of that in the footage in the trailer that hit Friday.

#TheSuicideSquad in theaters and streaming on @HBOMax August 2021.
*Available on @HBOMax in the US only, for 31 days, at no extra cost to subscribers. pic.twitter.com/sugYcauNNq

For example, get a load of the banter between Idris Elba’s Bloodsport and John Cena’s Peacemaker:

“And I’ve decided you should eat a big bag of d***s,” answers Bloodsport.

Peacemaker doesn’t let up: “If this whole beach was completely covered in d***s, and somebody said I’d have to eat every d*** until the beach was cleaned for liberty, I would say, ‘No problemo!'”

The argument as the group plods through the jungle prompts Daniela Melchior’s Ratcatcher to ask, “Why would someone put penises all over the beach?” Peacemaker quips back, “Who knows why mad men do what they do?”

As opposed to the dark, moody Gotham-set tone of David Ayer’s 2016 Suicide Squad and the Zack Snyder DC canon, Gunn’s sequel is bright and colorful, and looks to be set largely in a Latin American country where the revamped Suicide Squad has been sent in.

Several new characters appear here: Michael Rooker’s Savant (who appears to have a bomb planted in his head by Viola Davis’ Amanda Waller), Pete Davidson’s Blackguard, Peter Capaldi’s The Thinker (who is taunted by the Suicide gang that if he does certain things, such as possess personalized license plates as Margot Robbie’s Harley Quinn threatens, he dies), and Steve Agee doing double duty as Waller’s No. 2 John Economos and the doltish King Shark. Overall, a ton of Gunn fun here we can’t wait for.

The Suicide Squad hits both theaters and WarnerMedia’s HBO Max streaming service on the same day, August 6, due to the pandemic. The first movie opened to $133.7 million at the domestic box office, setting an August opening record; it went on to gross $325.1 million stateside and $746.8 million worldwide.