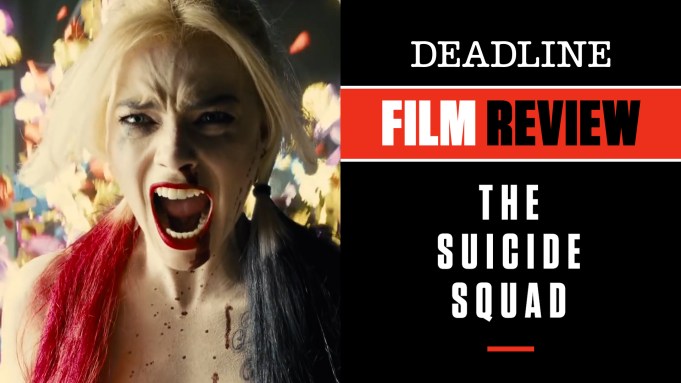 The best thing Warner Bros did with its new The Suicide Squad was to bring in writer-director James Gunn, who has made this sequel to the flawed 2016 hit that starred Will Smith and Margot Robbie a hell of a lot more fun. Gunn clearly loves the DC comic book and has brought together a rollicking group of supervillains for a really entertaining hard-R-rated take on the property that has just as much in common with ’60s-era movies like The Dirty Dozen and Kelly’s Heroes as it does with most of the DC canon. Gunn says he was inspired by those films in coming up with this new version, and it shows — in a good way.

Despite Smith and a game cast, the 2016 film, although a box office success, just never quite got the tone right, and missed the whole point of having fun with these despicable but oddly likable characters, repulsive as they may be. Gunn’s screenplay creates a new clan of deplorables so bad they are good. That seems the point here as the government’s Amanda Waller (played again by Viola Davis) recruits this badassss filthy dozen or more Belle Reve prisoners with a simple proposition: Accept her offer to become part of Task Force X and take on a near-impossible and dangerous mission against the new uber-corrupt leaders of the island known as Corto Maltese, or rot away behind bars forever.

Still, even that idea does not convince Robert DuBois, an ex-military operative aka Bloodsport (a fantastic Idris Elba), who is needed as the brains and brawn to lead the new terrific team. Only when Amanda uses the future well-being of his lovely teenage daughter does he reluctantly agree to band together with this ragtag group of lowlifes. Also heeding the call are Peacemaker (John Cena), a red-white-and-blue patriot who believes no amount of bodily harm is too much in order to keep the peace. And there are more including one of the rare returnees in Captain Boomerang (Jai Coutney), long-silver-haired demon Savant (Michael Rooker), Weasel (Sean Gunn) and Blackguard (an underused Pete Davidson).

Key to the goal, though, are newbies including obscure Polka Dot Man (David Dastmalchian), who hurls his colorful lethal weapons like armies of dots and only thinks of his mother in using them to kill; King Shark (voiced by none other than Sylvester Stallone), a half man/half shark who regularly dines on people but really is kinda sweet-natured; and Ratcatcher 2 (Daniela Melchior), whose way with those rodents makes Willard look small-time. Sebastian, the faithful companion on her shoulder, is a rat for all seasons and a delight to watch, even though the mighty Bloodsport suffers from a fear of rats. Ick.

Oh, and of course no Suicide Squad would be complete without the eponymous Harley Quinn (Robbie, in fine form) sprung again from Belle Reve and ready to rumble. She does just that as only a queen bee could in a memorable sex scene with villainous but suave Presidente General Silvio Luna (Juan Diego Botto). She fits in nicely with the troupe as they land on the island, many of them instantly meeting their demise in a D-Day invasion that truly lives up to the promise of a suicide mission. Those that make it have bigger fish to fry in the form of the vicious, 150-foot-tall Starro, a giant starfish (a la the Marshmallow Man) that shoots out miniatures of its ilk to squash protesters’ faces. They also have to contend with the top-secret project of Thinker (Peter Capaldi), and much more. One other returning character, Colonel Rick Flag (Joel Kinnaman), seems positively normal compared to everyone else in this bunch. All the while, Amanda is watching their every move from headquarters in case anyone tries to reverse course.

I had a blast with all this, and if you are a fan of the original comic book, this squad is the real deal. Interestingly, the film’s title makes no reference to the previous movie, which means there is no “2” next to it. Arrogant as it may sound, Gunn is well within his rights to simply call it THE Suicide Squad, almost like he has erased the first one from our memory. This is indeed the smart take on the Suicide Squad comic book, and it isn’t a surprise coming from Gunn, who is also responsible for Guardians of the Galaxy, a refreshingly similar collection of oddballs in the MCU but much safer PG-13 versions. This one goes for the jugular(s).

Producers are Charles Roven and Peter Safran. Warner Bros releases it Friday in theaters (the place to see it) and HBO Max. Check out my video review with scenes from the movie at the link above.

Do you plan to see The Suicide Squad? Let us know what you think.