The Golden Globes Is Beyond Fixing And The HFPA's Time Is Up: Commentary
Read the full story
July 31, 2018 4:42pm
6Comments 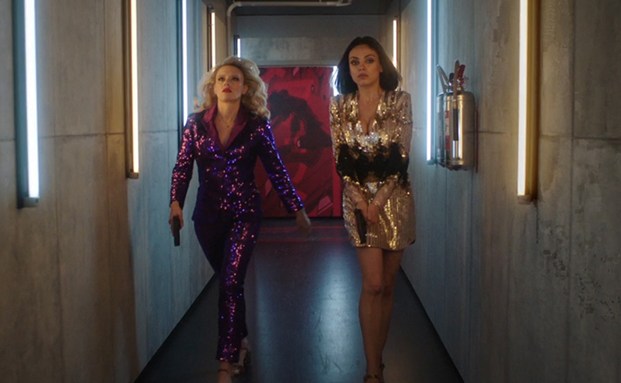 The funniest thing about Lionsgate’s new action comedy The Spy Who Dumped Me is the title. Clearly inspired by the success of Melissa McCarthy’s similar Spy three years ago, but far inferior in style and tone, this one looks closer to what might have happened if Lucy and Ethel went to Europe and hooked up with the CIA. Mila Kunis is Ethel, or actually Audrey, while Kate McKinnon gets the laughs as her BFF Morgan, who seems to instigate all the trouble in her zeal for adventure when Audrey’s ex-BF Drew (Justin Theroux) turns out to be up to no good as a Jason Bourne type on the run with a much desired drive that could be world-changing for whoever has their hands on it.

As I say in my video review (click the link above to watch), the whole mishmash is predictable but saved by the comic hijinks of McKinnon, who seems to be so much better than the movies she is in (i.e. Ghostbusters). As directed and co-written (with top TV scripter David Iserson) by Susanna Fogel, the movie overloads itself with some surprisingly violent and elongated action sequences that keep getting in the way of the laughs. Fogel gives it the old college try in attempting to find just the right tone between the two but drifts too far into Mission: Impossible territory, where it simply can’t compete. She does seem comfortable staging complicated action set pieces, but they aren’t distinctive enough to make this flick stand out in a summer of overkill.

The Bourne movies would be another example as this film starts off with Theroux running, jumping and dodging through the streets of Lithuania, pursued by unknown assailants who are after the drive he possesses. Eventually, out of desperation, he comes knocking at Audrey’s door back home, and before the bad guys get to him passes her a cheap-looking award statuette with the goods inside. She wants nothing to do with it — or him — but is convinced to go to Vienna to deliver it to Drew’s contact at a local cafe. Once she and Morgan set out, trouble begins as they get caught up in a vicious battle where just about everyone is left dead.

That’s just the start of all this mayhem as the action gets more frenetic and repetitive while they make their way through a number of handsome European locales and try to ingratiate themselves into the arms of the CIA and the local chief (played nicely by Gillian Anderson) as this spy thing is kinda fun, especially for Morgan. Along the way they are stalked and terrorized by a has-been Eastern European gymnast- turned-assassin (Ivanna Sakhno), even during a trapeze act in the circus, and helped (at least that is how it initially appears) by handsome agent Sebastian (Outlander’s Sam Heughan) and his cohort Duffer (Hasan Minhaj). Best bit in the movie has all of them confronted by an innocent stranger in a room who, after they all instinctively pull guns on him, simply observes, “Americans, right?”

Kunis is fine as the straight man here, but McKinnon gets the honors for lifting this minor summer confection to watchable levels. You only just wish the amped-up sound effects gave her a chance to compete. Every punch, shot, chase, screeching car, etc. is compounded by way-over-the-top sound design that doesn’t trust the audience to stay awake. Bring earplugs, and hope McKinnon gets a movie that matches her talents. Until then The Spy Who Dumped Me will have to do, but it’s exhausting. Producers of the Imagine Entertainment production are Brian Grazer and Erica Huggins. Lionsgate opens it Friday.

Do you plan to see The Spy Who Dumped Me? Let us know what you think.