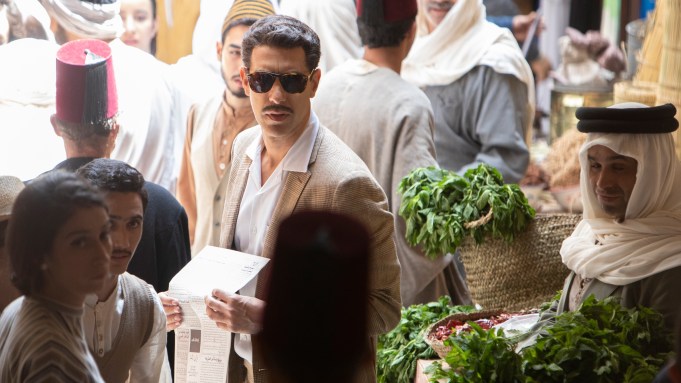 Ask yourself how you’d reply to these questions: “Do you consider yourself a patriot?” “If your country needed you to lie to your friends, your family, your wife — would you do it?” One Israeli clerk answered in the affirmative, and this is his story.

Here is the trailer for The Spy, Netflix’s limited-series thriller starring a cast-against-type Sacha Baron Cohen. He plays Eli Cohen, who goes deep undercover inside Syria on a perilous, years-long mission to spy for Mossad during the 1960s. The footage shows a determined but conflicted man who risks everything for Israel — including his home life.

The Americans’ Noah Emmerich is back in the spy game as Eli’s Mossad handler, who tries to ease his own guilt over the sacrifices his charge makes. Hadar Ratzon Rotem is Eli’s wife, who is left to raise their family on her own and knows something isn’t right about her husband’s government job. Waleed Zuaiter is a military officer who thinks he’s found the perfect ally in the undercover Cohen.

Directed by Homeland double Emmy winner Gideon Raff, The Spy launches globally September 6 on Netflix. Have a look at the trailer above and key art below, and tell us what you think.

Sacha Baron Cohen On The Inspiration, Artistry &amp; Danger Behind Emmy-Nominated ‘Who Is America’