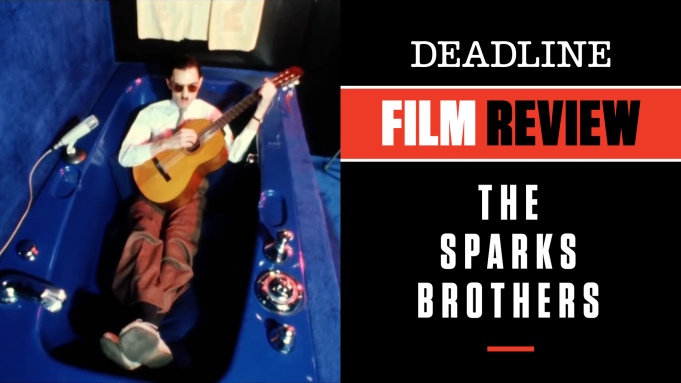 “50 Years. 25 Albums. 345 Songs. Unlimited Genius. Your Favorite Band’s Favorite Band.” That is what the poster for Focus Features’ wonderful new documentary The Sparks Brothers has to say about a pair of Southern California-born and -bred siblings who became all the rage in Europe over the past half-century, but somehow have never really gotten nearly the same kind of adoration in their own country. Until now. Because when you see what director Edgar Wright, arguably your favorite filmmaker’s favorite filmmaker (Baby Driver, Shaun of the Dead) has crafted here, you will wonder how the hell did this eye-popping, off-the-charts duo escape your attention all these decades? At least I did. Now thanks to Wright I am fully on board with Sparks’ singular, if bizarre and wickedly amusing, brilliance, and now I have to find all 25 albums to catch up. Fortunately, this 2-hour-and-15-minute documentary does a lot of the homework for me.

Sparks (at one time known as Urban Renewal Project and Halfnelson before settling on its permanent name) is really the musical moniker for the band fronted and energized by brothers Ron and Russell Mael, whose strange, completely original, sometimes compelling, sometimes repelling style and sound made them instantly cult beginning with their 1972 debut album and still going today, forever changing their musical inspiration in ways that defy easy definition. These guys just keep on keepin’ no matter how the times change.

As the documentary shows, however, Sparks’ various incarnations — from art glam and 1920s Charleston to ’40s Big Band and ’80s electronic and art/rock — have, to use the title of their 2020 hit, provided a “steady drip drip drip” of material that now numbers 345 songs and growing. Ron, with trademark Hitler moustache, plays the keyboards and is a creative genius, and Russell is lead singer with a distinctive falsetto that Tiny Tim would envy. Apparently several others would as well; Wright has gathered a who’s who of admirers to act as talking heads here including Beck, Flea, Patton Oswalt, Jack Antonoff, Bjork, Go-Go’s Jane Wiedlin (a superfan and great interview here) and so many more to describe just what makes Sparks so influential to so many bands you may know a lot better.

The film, using inventive animation and quick edits, is anything but typical in the genre. But Wright has made a movie that serves its subjects with reverence and irreverence because Sparks not only makes its mark musically, but also comically (one reason Weird Al Yankovic counts among its fans). We get a generous dose of tunes, beginning with the breakthrough on Britain’s Top of the Pops where “This Town Ain’t Big Enough for Both of Us” became a hit, and in many appearances in the U.S. on Dick Clark’s American Bandstand, which didn’t generate the same amount of fandom the band experienced overseas (though L.A. radio station KROQ kept them in the mix with rabid local fans). The film also documents their attempts to break into movies with a not-realized project for France’s Jacques Tati, who shared similar droll comic sensibilities, and director Tim Burton, for whom they tolled before he abandoned another never-made movie.

Finally, Wright’s docu and the upcoming Cannes opening-night film, Leo Carax’s Annette starring Adam Driver and Marion Cotillard, are promising to make Sparks’ film ambitions reality and gain it an entirely new audience as the brothers are now in their 70s. They actually started out at UCLA as film students but soon drifted into music just in time for the visual delights of the MTV generation to discover their quirkiness. So did Giorgio Moroder, the German maestro, who wound up producing a hit album in the early ’80s for them that took them into a whole new arena and the hit dance song “When I’m With You.”

First and foremost, The Sparks Brothers is just pure fun, off the beaten path just like its title stars — and stars they are just waiting to be discovered over and over again. Nira Park, George Hencken and Laura Richardson produced. Focus Features releases the documentary in theaters Friday.

Check out my video review above with scenes from the film. Do you plan to see The Sparks Brothers? Let us know what you think.