Continue to Deadline SKIP AD
You will be redirected back to your article in seconds
Skip to main content
January 30, 2021 9:34am 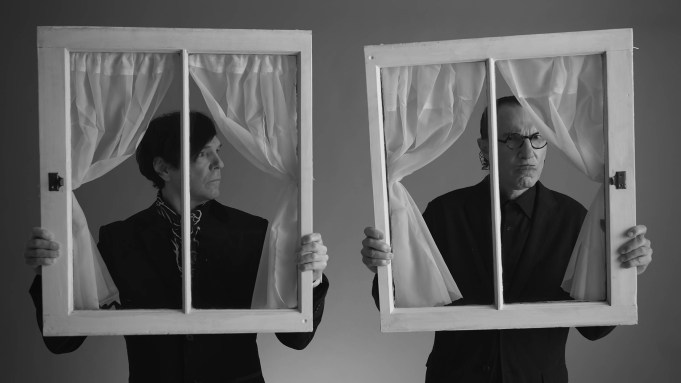 For the uninitiated, you may have caught Sparks on late night TV, or glanced at their riveting album covers when you were a kid in the 1970s or the 1980s; artworks comprised of Geisha girls, the duo tied up in a boat, or dressed in wedding get-up.

If you were the Go-Gos, Paul McCartney, Toni Basil, Flea of the Red Hot Chili Peppers, or “Weird Al” Yankovic, you were definitely paying attention to the flamboyant and absurdist style of Angelino native brothers Russell and Ron Mael, and they were always seeping in, making an epic impression.

Russell was the lead singer, whose glam rock looks would catapult the duo early in their career, and brother Ron, the instrumentalist, who donned a Hitler mustache and a hysterically funny frozen face during their performances. While Sparks launched here in the U.S., initially has Halfnelson, they were a bigger sensation over in the UK around the 1980s; the country’s fans laying claim to the Sparks as their own. Cult bands like these have a history of breaking up or becoming one-hit wonders, however, Sparks has survived decades, continually pulling in an audience of 16-60 at their concerts.

Baby Driver filmmaker Edgar Wright has been a Sparks fan since childhood. He caught them on an early music show called Top of the Pops, essentially the equivalent to American Bandstand here in the states.

“Ron and Russell cut a very striking figure. Seeing Sparks on Top of the Pops for people was very memorable or perhaps intimidating,” says Wright who savored their songs like  “Beat the Clock” on vinyl.

“I would sort of obsess over it without truly understanding the lyrics,” says Wright.

Wright met the guys via Twitter: He learned that they were followers of him, and lived within 25 minutes of him in L.A. He met them for breakfast soon after. But it was after one of their L.A gigs post 2017 that Wright, encouraged by filmmaker friend Phil Lord, sparked to the idea of making a documentary about the Sparks Brothers.

Says Ron Mael, “We’d been resistance to overtures by other directors or people who weren’t known to do documentaries, because we always felt that it would diminish what people thought of us. Their imagination of what we were, kind of them filling in the holes, was stronger than somebody coming in from the outside and making a burning concrete representation of what we were.”

“(Edgar) really had an appreciation of all the periods of Sparks, to the present day. We didn’t want a documentary to be a nostalgia trip, but it would be seen, that despite any ups and downs during the periods, present day is as strong as previous periods,” Ron told us at Deadline’s virtual Sundance Studio.

Wright mentions in the doc, that it’s the Sparks Brothers’ sleeper success which has been their strength versus any commercial explosion.

Russell Mael tells Deadline, “Despite the digital age, we’ve always been our own bosses and we managed to find record labels where you find one person who shares the same sort of mentality, musical mentality; to want to support what we’re doing; someone who supported us through any period through our ups and downs because they always shared the same artistic vision as we’re doing.”

Adds Russell, “staying 100% true to your vision” is why Sparks has been around for well over 50 years.

The Sparks Brothers, from MRC Non Fiction, is playing in the Premiere section at the Sundance Film Festival today at 3PM PST.