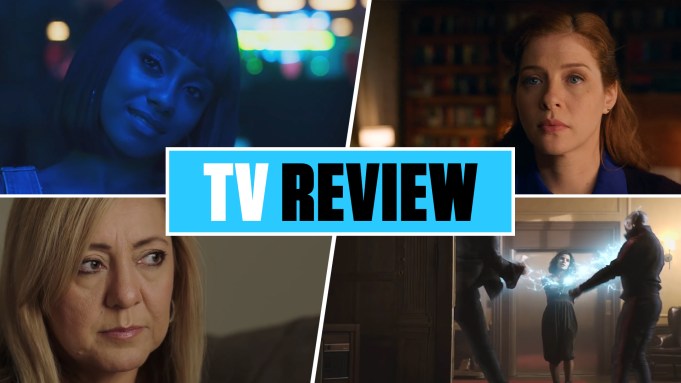 The Sundance Film Festival ended on February 3, but this week sees some aftershocks from the Robert Redford founded snowy shindig on the small screen among the contenders for the show you have to watch.

But, as the video above reveals, there can only be one winner among the cream of the TV crop.

Launching on February 15 on Amazon, the Jordan Peele executive produced and Joshua Rofe directed Lorena aims to tell the story you don’t know behind the media saturated tale of the slicing off of John Bobbit’s penis by his much abused and assaulted wife in 1993. In this #metoo era, this four-hour documentary, which debuted at Sundance, has timely stamped all over it.

Also premiering with a preview at Sundance this year was the Lena Waithe and Halle Berry EP’d Boomerang, which debuts tonight on BET.

Much more a recharge than a reboot, this Paramount TV co-production and Ben Cory Jones showrun series picks up over a quarter of a century after the events of the 1992 Berry, Eddie Murphy and Robin Givens-led movie with their millennial offspring and the legacy and consequences that the Tequan Richmond, Tetona Jackson, Leland Martin and Lala Milan portrayed characters face.

Also featuring a former James Bond in Timothy Dalton and Alan Tudyk, the latest live action series from the streaming service that started last fall, this team of misfits first appeared in the comics 55 years ago – long before Sundance first screened a movie.

This offering executive produced by Empire co-creator and from writer David Elliot focus on a team of defense lawyers led by a former convicted murderer played by Rachelle Lefevre that seek to bring justice to the wrongly accused. Throwing some sinister shade on that intention is the Kelsey Grammer portrayed prosecutor who put Lefevre’s Madeline Scott away for years.

To discover which one is the show you have to watch this week, you’ll have to watch my video above – to that I plead totally guilty.