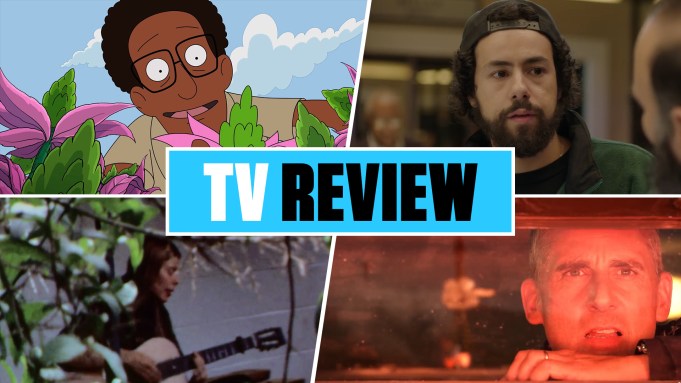 America may have to wait a few days or even more to see the first NASA astronauts to take off from the US in almost a decade finally head to the skies, but there are some pretty big launches on the small screen this weekend.

Out of our quartet of contenders, only one will plant the flag to be the show you have to watch – as you can see in my video review above.

A trio of shows come tomorrow with AppleTV+’s animated musical comedy Central Park, Season 2 of Hulu’s Golden Globe winning Ramy and a timely lift-off of Netflix’s star-studded Steve Carell and John Malkovich-led Space Force. On May 31, one day after Elon Musk’s SpaceX rocket is now scheduled to life-off, Epix launches  the melodic tunes and dramas of Laurel Canyon in a new two-part docuseries.

A virtual supergroup of talking heads with interviews with the likes of Linda Ronstadt Jackson Browne, Graham Nash, The Eagles’ Don Henley, and The Mamas & the Papas’ Michelle Phillips, the Alison Ellwood directed docuseries Laurel Canyon aims to be as intimate as the music from the fabled L.A. neighborhood. Debuting on May 31 and concluding on June 7, the Frank Marshall, Amblin Television, Warner Music Group and Jigsaw Productions produced effort from the Sundance premiering The Go-Gos helmer goes inside the tunes of Joni Mitchell, The Doors, the Flying Burrito Brothers, CSNY and the Buffalo Springfield to capture the partial soundtrack of multiple generations.

Reuniting Steve Carell with The Office’s Greg Daniels, and featuring the last performance of Fred Willard, Space Force takes off on Netflix tomorrow.

Back just over a year after its award winning first season debut, Hulu’s Ramy has a pretty holy addition for its sophomore run in Mahershala Ali. Joining co-creator Ramy Youssef for the 10-episode second season, the two-time Oscar winner portrays a mentoring and “cool radical” Sheikh who tries to help the lead find himself and his Muslim faith.

So, who will sing the song of victory this week? The winner is always different but the method remains the same – watch the video review above to find out.