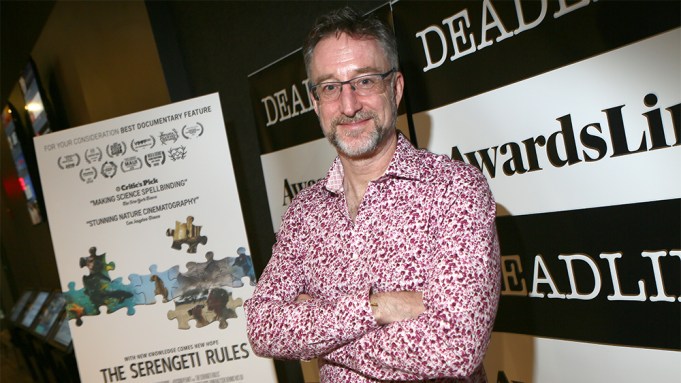 Everything is connected when it comes to nature, in the view of filmmaker Nicolas Brown. His documentary film, The Serengeti Rules, depicts a handful of scientists whose breakthrough discoveries about everything from urchins to otters all turned out to be interrelated in the larger scheme of things.

Similarly, the human-scale narrative — think Jane times six — is linked with the current environmental moment and the conversation (or lack thereof) about climate change. While there’s no explicit call to action or Al Gore PowerPoint in The Serengeti Rules, the film expresses a similar wakeup call in a more lyrical and character-driven fashion.

“When things become tribal,” Brown reflected during a recent Q&A after a Deadline-hosted screening of the film in New York, “it’s less about what you think and more about who you are. The more entrenched we become in our tribes, people are kind of like, ‘Oh, are you the for-nature tribe or the against-nature tribe?'”

As to the larger issue of climate change, he continued, “I don’t think we can solve this technocratically. I think we have to solve it morally. It’s about looking inside and saying, ‘What relationship do I have with nature, and do I really know what impact I have if I eat a lot of meat or use plastic straws? What responsibilities do I have as an individual?”

The role of each individual scientist in the film drives that point home. Using recreations, archival footage and contemporary scenes of the scientists in their natural habitats, Serengeti Rules — which is based on a book by the same name — weaves an omnibus tale. The first scientist shown is Bob Paine, who conducted landmark experiments on “keystone species” like starfish in the tidal pools of the Northwest U.S. He had terminal leukemia and died shortly after appearing in the film, a fact suggested in the opening moments as he is speaking from his hospital bed. Paine’s willingness to speak for the film when, as Brown recalled, his condition enabled him only about 20 minutes a day of lucidity, lends an urgency to the rest of the story.

“To invite a film crew on your death bed ….” Brown marveled, his words trailing off. “For these people who are ecologists, it’s not a profession. It’s a way of life. It’s not something you just do as a job and go home. They live and breathe this and he breathed it until his final breath.”

The logistical challenge of capturing a diverse mix of flora and fauna was not a new one to Brown. He directed National Geographic’s award-winning Imax film Pandas: The Journey Home and the BBC docuseries Human Planet. He has also won three Emmys including one for Outstanding Continuing Coverage of a News Story—Long Form for the film The Truth About Global Warming.

Even so, the thing Brown was trying to capture in Serengeti Rules was elusive. “We were trying to see the invisible. Interactions are invisible in nature,” he said. “This is the bane of all wildlife filmmaking. You get there and you might see a dead thing, a carcass, and then a full thing over here licking its lips. To get that moment of predation is very, very difficult.”

The “urchin barrens” documented by scientist Jim Estes, for example, developed over the long term but needed to be dramatized cinematically in a more compressed way. “He saw it over a period of five years but that’s no time in geological time,” Brown said.