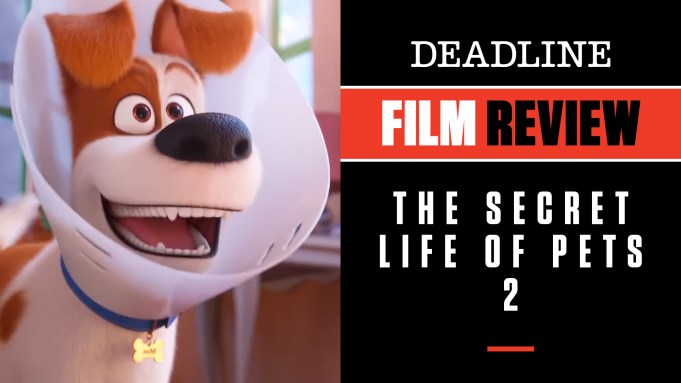 Illumination knows how to do it, and they’ve done it again with my favorite animated franchise. In fact, I would say The Secret Life of Pets 2 even tops the first one in laughs, heart and gorgeous animation. I am at a loss as to why this outfit doesn’t get the same critical love as a Pixar or DreamWorks Animation as it is every bit on that level.

The Pets concept was a winner from the first moment I heard it. Who among us who has ever had, or loved, a pet has not wondered what the hell they do all day when no one is at home? The 2016 first edition explored that idea, and it is taken to extremes this time as the regulars from that film, plus a few choice additions, make this a must for kids obviously but also entire families as there is something for everyone here.

Max (voiced beautifully by Patton Oswalt, replacing Louis CK from the original), the lovable pooch owned by Katie (Ellie Kemper), is back, now living with the big lug of a canine Duke (Eric Stonestreet). But Katie has found love and gotten married and had a baby, Liam, which adds to the stress of Max, who finds himself with nervous tics such as scratching himself constantly. Katie takes him to a therapist whose solution is to put a plastic cone around Max’s neck. The stress levels increase as the whole family, including the dogs, takes off for a vacation at a farm. Of course the addition of all sorts of new creatures — including a psychotic turkey — add to Max’s anxieties, topped by his encounters with a herd dog named Rooster (Harrison Ford, stealing every scene in his first job ever in an animated feature) who has a lot of practical tips for the newcomer.

Meanwhile, there are two other storylines going on. Gidget, the fluffy pomeranian with a crush on Max, agrees to watch over his favorite toy Busy Bee while he is away and promptly blows the assignment by watching the toy sail out the window, down the fire escape and into the apartment of the resident cat lady who lives with dozens of scary looking felines anxious to make Busy Bee their own. Freaking out, she enlists the help of friends including the pug Mel (Bobby Moynihan), the dachshund Buddy (Hannibal Burress) and cat extraordinaire Chloe (Lake Bell) to teach her how to be a believable puss in one of the movie’s funniest bits as Gidget decides to go undercover and retrieve Max’s heirloom.

At the same time, Kevin Hart’s loony bunny Snowball is back, this time with visions of glory as a superhero, Captain Snowball (just gotta work the superhero label into a summer movie, folks). He joins up with new character, a Shih Tsu named Daisy (unmistakably Tiffany Haddish), as they attempt to rescue an abused tiger from its deranged circus owner (Nick Kroll) who keeps a quartet of ferocious wolf dogs to make sure the tiger stays put. This bit allows another welcome visit to the all-knowing elder hound dog Pops (Dana Carvey) as well.

It all comes together in the end, but the fun is in the getting there with each character beautifully drawn and engaging on their own. Sure there are echoes of a lot of Disney classics from Lady and the Tramp to 101 Dalmations and Toy Story, but Chris Renaud, his co-director Jonathan del Val and screenwriter Brian Lynch know exactly what they are doing and the results are a complete delight — for my money the best animated film of the year so far.

Producers are Janet Healy and Chris Meledandri. Universal opens it Friday. Check out my review with scenes from the film by clicking the video above.

Do you plan to see The Secret Life of Pets 2? Let us know what you think.