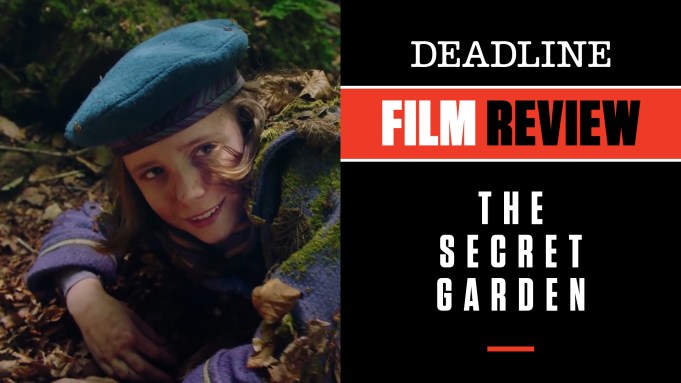 There have been (at least) four TV versions, four film versions, Broadway plays and musical versions, other projects with titles like Return To… and Back From…., even a 2017 Steampunk version, for God’s sake. Did we really need yet another Secret Garden?

This time around, Frances Hodgson Burnett’s Edwardian-era set 1911 novel has been switched to post-WWII 1947, but the idea is very much the same. Mary Lennox (Dixie Egerickx) is orphaned and off to Uncle Archibald Craven’s (Colin Firth) dilapidated mansion, Misselthwaite Manor, where the good times are a thing of the past ever since his wife died. Mrs. Medlock (Julie Walters) tries to keep everything, and everyone, in shape, but it is a very grim place, with sickly son Colin (Edan Hayhurst) largely confined to bed. That is until Mary starts to bring a new kind of life to the proceedings; befriends and encourages cousin Colin to take part in life; and, most important, discovers that oh-so-magical secret garden right on the other side of the wall.

There she runs into a local kid, Dickon (Amir Wilson), and with stray dog Hector finds that glorious things can happen in the garden. Soon Colin is coaxed out of bed to find new powers of healing there as well, and the children’s classic tries mightily to measure up to its reputation.

The most recent major-studio film version of any real note goes all the way back to 1949 — a couple of years after the time-set change for this version. Apparently, screenwriter John Thorne (The Aeronauts, Radioactive) felt this period would have particular resonance for England, and the very downbeat nature of the characters and their habitat would indicate a kind of bombed-out exhaustion and need for some invigorating. That is exactly what the Mary Lennox character is intended to bring here — to really shake things up and find the beauty again in things that used to be.

Marc Murden tries to invest this classic tale with a new relevance so that kids in particular can relate, and certainly producer David Heyman (the Harry Potter series) knows his way around this kind of material, but the joy and delight of another children’s classic, Paddington, that he brought to that movie and its even better sequel is not always on view here. Part of the problem is really that this secret garden isn’t all that extraordinary. You have to make a leap to believe it is really all that.

The actors do their best, and it’s always lovely to see Walters and Firth in period garb, but the truth is both these actors could do these kinds of roles in their sleep. Isis Davis has a nice presence as Martha, another adult in the room, but it is the kids who seem to be having the most fun, Egerickx especially, even if she was better in the recent gem Summerland. Here she carries a heavy load but does well enough. Hector the dog is terrific.

STX Films releases The Secret Garden today on VOD. It is welcome family entertainment, even if the magic might have been ramped up a bit more. Check out my video review with scenes from the film at the link above.

Do you plan to see The Secret Garden? Let us know what you think.