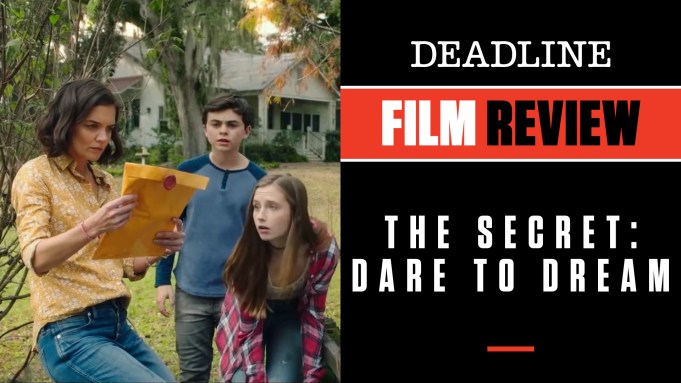 On the surface, making a major motion picture entertainment out of a self-help book would seem not to be an easy task. Woody Allen did it with a sex manual in Everything You Always Wanted to Know About Sex but Were Afraid to Ask, but then he’s Woody Allen.

Taking on author Rhonda Byrne’s 2006 book The Secret would appear to be impossible; it’s a book that tries to inbue the reader with the power of positive thinking and belief that if you manifest good things in your life, you can make them all come true. And yes, it would be impossible if you attacked it literally as the accompanying 2006 documentary video did. But the author says she always thought there was maybe another way into it theatrically.

After years of figuring out how to make it work, director Andy Tennant — helmer of such mainstream Hollywood films as Hitch and Sweet Home Alabama — and his co-screenwriters Bekah Brunstetter (This Is Us) and Rick Parks, found the secret of how to make this a palatable and sweetly old-fashioned movie designed to inspire the legions of the book’s ready-made believers. And yes, it would help enormously if you already believed in ‘The Secret’ so you can buy right into the premise of what these filmmakers have crafted.

Katie Holmes hits all the right emotional notes as Miranda, a mother and widow trying to bring up three kids just outside of New Orleans and still reeling from the tragic early death of her husband. She is struggling financially, with not even enough money for a much-needed root canal, when her car accidentally rear-ends another driven by Bray (Josh Lucas), an almost too-good-to-be-true Samaritan who instantly offers to fix up her front bumper even though the accident was her fault. And then, believe it or not (and remember folks, you have to believe) he is there at the ready when a big old tree comes crashing through her roof and straight into the middle of her kitchen during a ferocious storm. No problem, Bray can take care of this in a matter of days and for only $500 — for materials. This guy is too good to be true, right? But he’s also mysterious, spouting philosophy that if you manifest good positive thoughts and believe you can do it, you will. He makes a good impression on Miranda’s kids, and she is thankful but still wondering why.

Meanwhile, her reliable and successful boyfriend Tucker (Jerry O’Connell) is skeptical, but he has his eye on the prize, and actually proposes to Miranda at a crowded cafe. She accepts, but Bray is still around, and there is some kind of mysterious connection between the two — a bond that will become apparent in bits and pieces as we learn from Bray’s flashbacks. When her car hit him, it was karma, something that was meant to be, an act that answered part of Bray’s own belief in “the secret,” a personal life-changing course that happened to him after a brush with death. The film does exhibit a sense of humor about itself with Miranda’s mother-in-law Bobby (the always terrific Celia Weston) asks him, “Are you from California?”

This is undeniably a movie about hope, attraction and the will to believe in yourself. The filmmakers are fairly successful in weaving the self-help lessons from the huge best seller without laying them on so thick that you are taken out of the story. In addition to Holmes, Lucas and O’Connell, the kids also are well cast, with non-cloying work from Sarah Hoffmeister, Aidan Pierce Brennan and Chloe Lee.

This isn’t like a faith-based movie that asks you to pray every 10 minutes, but it is selling a message and has been nicely crafted almost like a film from the ’90s, when we saw stuff like Ghost or John Travolta’s Phenomenon. This has that kind of spiritual component and is fortunate to have actors who can deliver it with a straight face and make you believe — or at least want to in these troubled times where Byrne’s book can have newfound relevance.

Producers are Robert W. Cort, Joe Gelchion, Robert Katz, Matthew George and Byrne. Gravitas Ventures releases the Lionsgate and Roadside Attractions film, originally designed for theatrical release in April before theaters unfortunately shut down, on VOD and digital platforms Friday. Check out my video review with scenes from the film at the link above.

Do you plan to see The Secret: Dare To Dream? Let us know what you think.