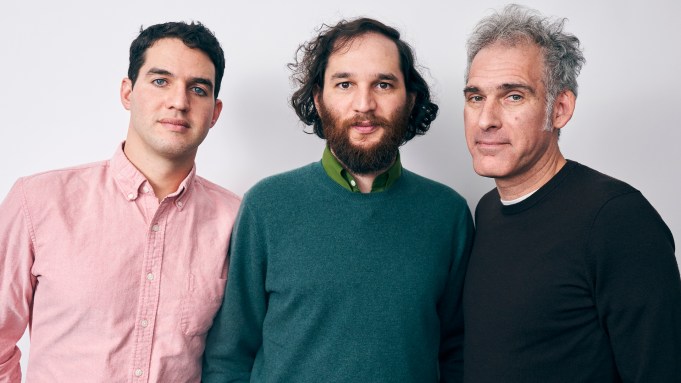 Following its well-received premiere at the Toronto Film Festival in September, the Safdie brothers’ Uncut Gems, their sixth film, proved just as successful on release, grossing a record per-venue average of $105,099 for distributor A24 before going wide Christmas Day.

Set in 2012, it stars Adam Sandler as Howard Ratner, a jeweler in New York’s diamond district who illegally imports a massive opal he thinks will enable him to pay off his gambling debts and start afresh. It would seem to be a natural follow-on from the Safdies’ previous film — 2017’s Good Time, a crime romp starring Robert Pattinson — but, as the brothers revealed recently at Deadline’s The Contenders New York, Uncut Gems is a film they’d been trying to make for nearly 10 years.

“It’s [been] the better part of a decade,” Josh Safdie told the DGA Theater crowd of Academy and guild voters. “We started the first draft in 2009 and finished it 2010. But the impetus, the drive, to make this film started well before that: our dad was a runner-slash-salesman in the diamond district for an eccentric guy who was trying to earn his place, or felt like he constantly was trying to earn his place, [in the world]. We made other work in between, but all the work in between were these kind of tangentially related educational detours, because we didn’t have the right to make this film 10 years ago. Who did we even think we were to go out to Adam Sandler in 2011? I think we were right to have been turned down by him twice.”

“It’s funny,” added Bennie Safdie, “because we thought we knew how to make it back then, but, like Josh was saying, we learned new things with each project. At first it was like, ‘Oh, it’s this big weight over your shoulders — you gotta make this movie Uncut Gems.’ We always joked that we’d be, like, 75 years old when we finally got to make it. So luckily it was only 10 years. But in that process, because the things were related in some ways — like, we did a basketball documentary here, something else there, and then Good Time for pacing — it felt like everything was worthwhile. Like, gearing us up for this moment.”

To hear more from the panel featuring the Safdies and Uncut Gems co-writer/editor Ronald
Bronstein, watch the video above.