Continue to Deadline SKIP AD
You will be redirected back to your article in seconds
Skip to main content
February 4, 2020 3:32pm
3Comments 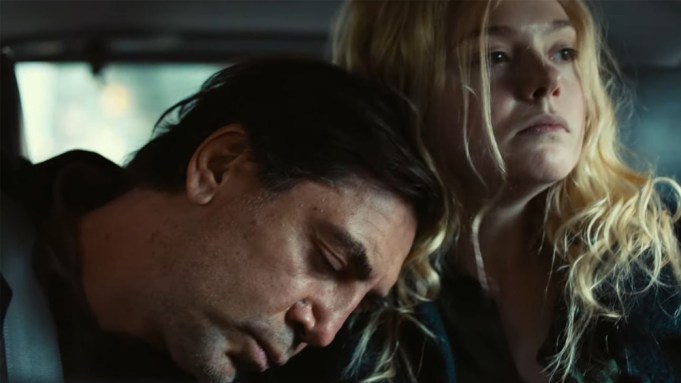 Through tears, Molly (Elle Fanning) searches the eyes of her father, Leo (Javier Bardem), but he’s simply too far away, as distant as castaway wandering some distant dark shoreline. It’s an especially evocative moment in the just-released trailer for Bleeker Street’s The Roads Not Taken, the latest drama from writer-director Sally Potter.  “No matter how far away you go,” the anguished daughter says, “you were always you.”

It’s an especially evocative moment in a existential road trip that premieres at the 70th Berlin International Film Festival (which gets underway February 20) and opens in the U.S. on March 13. The R-rated drama takes its title from Robert Frost’s near-namesake poem, The Road Not Taken. Like Frost’s 1916 expedition through the dense woods of yearning regret, the Potter film roams the treacherous expanse  that lies between the life that Leo has lived and the life that Leo could have lived. The movie takes place in a single day (although Leo, with his fractured perceptions of time and place, might say otherwise) and looks to feature a strong core ensemble with Laura Linney, Salma Hayek, Branka Katic, and Milena Tscharntke.

The official synopsis: “Sally Potter’s The Roads Not Taken follows a day in the life of Leo (Javier Bardem) and his daughter, Molly (Elle Fanning) as she grapples with the challenges of her father’s chaotic mind. As they weave their way through New York City, Leo’s journey takes on a hallucinatory quality as he floats through alternate lives he could have lived, leading Molly to wrestle with her own path as she considers her future.”