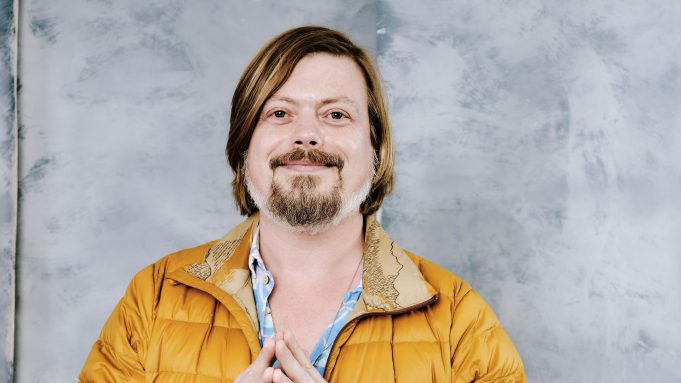 With his short-form comedy series The Ride, Linas Phillips learned that suffering can be useful, at least when it comes to his work as an artist.

Serving as the series’ creator, director and writer, Phillips also stars as Wayne, a 40-year-old rideshare driver and spiritual coach who has recently moved back in with his mom. While driving strangers around, Wayne discovers that he can find meaning in his life by giving them spiritual advice, and a little help with their negative thoughts—whether they want it or not.

Produced by the Duplass Brothers’ DBP Donut, The Ride was inspired by Phillips’ experiences from just a couple years ago. “I had moved back to LA. Things, to be honest, were not going super well for me,” he explained, in an appearance at Deadline’s Sundance Studio. “I was getting over a breakup, and struggling financially. I was Lyft driving.”

At the time, DBP’s Charlie Leahy and Nigel Lopez-McBean were looking for shows to develop. A close friend of Phillips’, Jay Duplass approached him with an offer he couldn’t refuse. “He called me up and said, ‘Do you want to do a show about how horrible your life is?’” the writer/director recalled. “And I was like, ‘Yeah.’”

As he began to develop the short-form series, Phillips felt a great deal of pressure. “I thought with short-form, you have to make it funny. I knew they wanted me partly because I’m funny, not just [because] of how pathetic and sad my life was,” The Ride creator said. “But the constraints of the different episodes helped me to kind of push my writing, to make it more condensed, and to put a lot of plot in there.”

Playing a key role throughout the process of putting the show together was Joslyn Jensen, another longtime friend of Phillips’, who appeared in studio. “Joslyn was very helpful,” Phillips said, “and would remind me about little moments, real things from my life, that I was maybe too embarrassed to put in on my own.”

“We’d go on these walks, and we’d talk about it, and he’d show me some scripts. Then, we worked together on an episode that I was acting in, and I was also on set to kind of be an assistant, and a second set of eyes,” Jensen added. “It was really great having that perspective—being [Linas’] friend, knowing which part of the show are from his real life and which parts are created, and seeing that blur to all seem real.”

For Leahy and Lopez-McBean, who executive produced The Ride, the project reflected the reason DBP Donut was set up in the first place. “[It was] to take what they’re doing for films and TV on the Duplass Brothers Productions side and find new, interesting platforms, as distribution partners,” Leahy said.

From the perspective of Lopez-McBean, the future of short-form remains unclear. But at the same time, it’s proven an opportunity to work with up-and-coming talent, while testing the boundaries of a relatively new and exciting space. “The format lends itself to new and diverse creators with a cool point of view being able to do something with this,” the EP said, “so Donut was essentially set up as ‘The Experimental Lab of Mark and Jay.’”

For more from our conversation with the team behind The Ride, click on the video above.