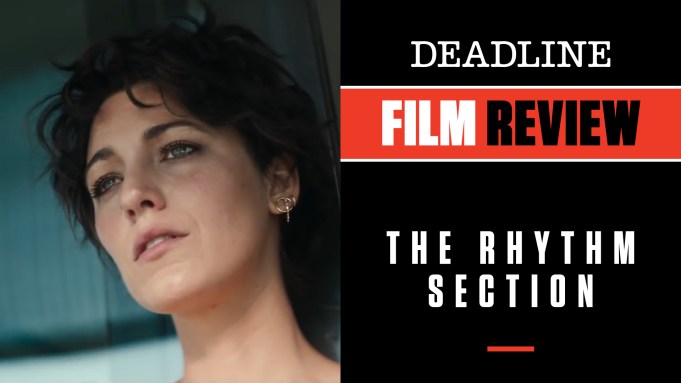 Lest you think the new film The Rhythm Section is some sort of musical picture, think again. The deceiving title refers to physical motions of body training in the film where the lead character, Stephanie, played by Blake Lively, goes through training to become an assassin and learns her breathing is like the bass, her heart is like the drums, and so on. Unfortunately this thriller misses a few beats along the way but none of it is the fault of its star, who is really very fine in the role of a woman whose life is turned upside down after her family is killed in a plane crash, at first thought to be due to mechanical failure but later revealed to be the work of a terrorist bombing.

Until she learns that fact her life is destroyed, as she turns to prostitution and drugs on a downward spiral that Lively plays to the hilt, without makeup or artifice, a woman truly at the bottom of the deck. Along comes a journalist named Keith (Raza Jaffrey), who tells her he has inside info and that sets the plot in motion where she sets out to avenge the deaths of her parents. Soon she is under the tutelage of an ex-CIA operative (Jude Law) who tries to turn her into a skilled assassin or hit woman as she sets out to learn who did this and bring justice of her own kind. It is a familiar plot and situation, the only twist being she isn’t naturally talented for this line of work and finds herself in and out of trouble because of it.

A lot of the plotting is predictable and very much by the numbers for this sort of thing, a mix of Bourne and boring even though there are the obligatory exciting chases on foot and in cars that ratchet up the action now and then. She also has a few scenes with another character, Marc (Sterling K. Brown), a guy with information for sale who tries to give her the 411 on things she knows little about. Soon she is in full bloom with disguises and wigs and on a tour through foreign locales to get answers and her bounty. Her altar ego is known not as Stephanie but as Petra and voila! — she’s transformed into a character that has already been the subject of four books by Mark Burnell who also adapted this one for the screen.

Reed Morano, who has done some pretty dark things in the indie films and The Handmaid’s Tale episodes she has directed, does a competent job behind the camera, but the film is rather murky looking considering the global sweep of the plot. Neither Brown nor most of the other supporting players make much of an impression, and Law looks like he could do this role in his sleep. Thank god for Lively, a truly underrated star who brings so much more to so many of the movies she does. Here she is utterly convincing in a role to which she alone manages to bring credibility.

Surprisingly, this rather downbeat thriller comes from Barbara Broccolli and Michael Wilson, keepers of the James Bond franchise, but it doesn’t appear to be aiming at that level of action picture. Paramount opens it today.

Check out my video review in the video above with scenes from the film. Do you plan to see The Rhythm Section? Let us know what you think.