Continue to Deadline SKIP AD
You will be redirected back to your article in seconds
Skip to main content
October 7, 2021 4:22pm 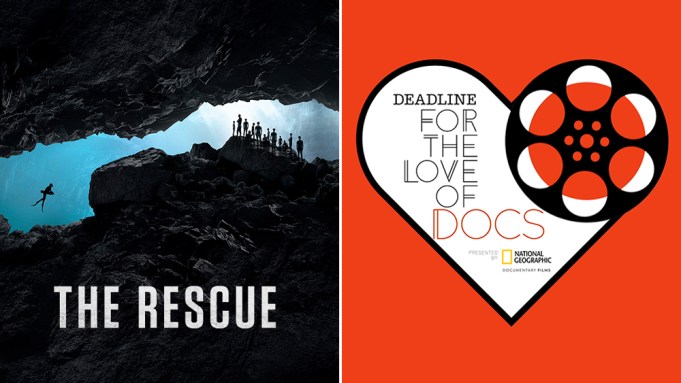 Free Solo filmmakers Elizabeth Chai Vasarhelyi and Jimmy Chin dealt with a mountain of challenges as they worked on their latest white knuckle documentary, The Rescue.

The National Geographic release tells the gripping story of the attempt to rescue 12 young members of a Thai soccer club and their assistant coach who became trapped in the flooded Tham Luang cave in 2018. The human drama unfolded before the eyes of the world, yet there was very little video from inside the cave for the filmmakers to work with.

“So often in documentaries you come across people with tons of footage and no story. We had a great story and no footage. Period,” Vasarhelyi noted as she and Chin discussed The Rescue for Deadline’s For The Love of Docs series. “The cave is pitch black. The water is muddy. No civilians were allowed to film” the rescue attempt inside the cave.

Vasarhelyi added that she and Chin were based “half a world a way” from Thailand as they tried to make their film, and then the pandemic hit. “There was every possible constraint you could imagine.”

Nonetheless, the husband and wife filmmaking couple, who won the Oscar for Free Solo, persevered. They constructed their film partly around the accounts of Dr. Richard Harris, an Australian anesthesiologist and cave diving enthusiast, and a team of British amateur cave divers who played crucial roles in the life-and-death operation. The divers themselves recreated some of the action that could not be filmed in the moment.

“It was very clear from the beginning that we would have to use reenactments,” Vasarhelyi said, “if we were going to allow audiences a way in and to really feel what transpired, understand the stakes of the rescue.”

Said Chin, “Authenticity and accuracy is obviously very important to us and really the exercise of bringing the divers together to show us how they actually did what they did was really critical for us.”

Some key video came from Dr. Harris himself, showing him administering sedatives to the children so they could be transported unconscious through flooded tunnels that spanned two kilometers.

“The footage that you see in the film of the children being anesthetized is real footage,” Vasarhelyi noted. “Dr. Harris had a Go Pro and put it on the side.”

As the film makes clear, the extreme measure of sedating the children was determined to be the only way, even if terribly risky, to save the kids. They would certainly have perished otherwise. Rescuers kitted several Thai pump workers, who had also become stranded in the cave, with oxygen tanks. Despite that, the workers nearly died in a panic after spending just 30 seconds underwater. The kids and their coach would have to be transported underwater for two and a half hours to reach the cave entrance.

“The film is about the kinds of decisions you have to make when you only have bad options,” Chin said, “and then how do you make those decisions. And in this case they made those decisions based on morality: ‘This is the right thing to do, even though we have everything to lose.’”

It’s an inspiring story on many levels—witnessing the heroism and selflessness not only of the British divers and Dr. Harris, but Thai Navy SEALS who aided in the rescue, and American military personnel who also played an important role.

“It’s true to the story to talk about how lots of different places, different languages, came together to rescue children they didn’t know,” Vasarhelyi observed. “That is the essence of the story. If you look back at 2018, one of the reasons why this story was so popular is we were living in really divided times and here was an example of how people could cooperate or be their best selves.”

For The Love of Docs is sponsored by National Geographic.