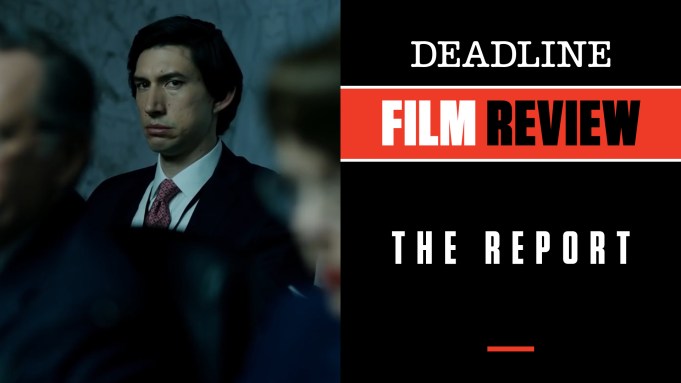 Whistleblowers are quite the topic du jour, not only in the nation’s capital but also in the movies. Upcoming next week is Dark Waters, about one lone lawyer’s battle against DuPont Chemical, but this week brings The Report, which chronicles one man’s dogged five-year journey to shine a light on the U.S. government’s secret covert program using illegal enhanced torture techniques.

In this case you have Adam Driver playing Daniel Jones, a Senate aide to California Sen. Dianne Feinstein. He is given the job of putting together a study on the CIA’s Detention and Interrogation Program, an assignment that turns into a bit of a nightmare as he must fight interference, secrets, lies, bureaucracy and impossible odds to deliver a 500-page report, edited from 7000 pages, detailing the post-9/11 Bush administration’s brutal and ineffective effort to use enhanced torture methods against our enemies. It is not just compiling the report, which uncovers truths the U.S. would like to keep buried, but also the effort to even get it seen and put in the record in any form that isn’t heavily redacted. And lest you think this film is a partisan whitewash, think again: As this effort continues, it is the Obama Administration that is shown to be less than willing to put it all out there for the world to see, preferring to make some initial statements against torture and then sweep it under the rug to move on to other priorities.

That writer-director Scott Z. Burns, who has written such ripped-from-the-headline films as The Informant, Contagion, Side Effects and The Laundromat (all for Steven Soderbergh, who is a producer on this film), can make a movie essentially about a guy working at his computer on a complex Senate project so exciting is really a cinematic miracle. This film is nothing less than stirring. It will have you riveted to the screen as an important and timely  story that blows the roof off Washington D.C. and its shenanigans to hide the facts, something that has sadly become even more prevalent today. That fact makes this film, about past indiscretions, a hot-button subject.

The Report reminded me of classic ’70s thrillers with substance like All the President’s Men and Three Days of the Condor. Burns knows how to build suspense from the simplest of ideas, and this one will have you biting your nails and, more urgently, spark lots of talk afterwards. Driver kind of reminds me of a new-age Jimmy Stewart in Mr. Smith Goes to Washington, the 1939 Frank Capra classic about an idealist fighting the establishment and triumphing. Here it is all a little grayer, our heroes coming from the wonky side of the political spectrum, but they are heroes nonetheless in their effort to fight forces of evil in the midst of a cover-up.

Driver is simply great as a man trying against all odds in a corrupt system. Annette Bening plays Feinstein and she’s brilliant, an uncanny portrayal that is Oscar worthy and one that is never an impression, but rather gets to the essence of the veteran senator. Jon Hamm is excellent as Denis  McDonough, the Obama chief of staff who has to bring the reality of politics straight to Jones, even while expressing sympathy for the cause. There is a superb supporting cast including Tim Blake Nelson, Maura Tierney, Corey Stoll, Douglas Hodge, T Ryder Smith and Ted Levine. The latter is very good as CIA head John Brennan, who does not come off well here but in real life has since changed his colors in the Trump era.

For some, the inclusion of some especially brutal and violently realistic scenes of torture peppered throughout the first half of the movie just may be too much to bear. Burns was right to include them, no matter how uncomfortable, because it gives Jones’ mission so much more credence and  value when you see the sheer inhumanity in which the U.S. was engaged. This is eye-opening stuff.

The film premiered at the Sundance Film Festival in January where Amazon Studios picked it up for a whopping $14 million. It opens Friday in a limited theatrical run, followed by its Amazon Prime debut November 29. In addition to Burns and Soderbergh, producers are Jennifer Fox, Danny Gabai, Eddy Moretti, Kerry Orent and Michael Sugar.

Check out my video review above with scenes from the film included. Do you plan to see The Report? Let us know what you think.