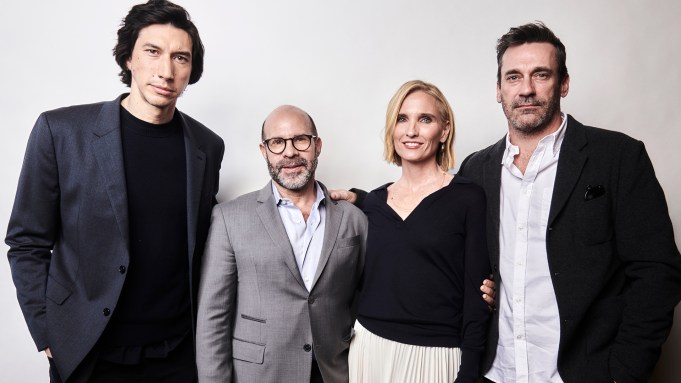 At Deadline’s recent The Contenders Los Angeles all-day event at the DGA Theater in Hollywood, a main focus for the Amazon Studios portion of the day was its new drama The Report, which while still in theaters just began streaming on Amazon Prime.

In front of a packed audience of Academy and key guild members, director-writer Scott Z. Burns, producer Jennifer Fox and stars Adam Driver and Jon Hamm explained why getting this movie made was so important to them. In fact, Fox told the audience, the movie required everyone to work for scale, and Burns was so dedicated he turned back his salary and put it into the film, which cost $8 million to make and was shot in less than a month.

Fox said they have been trying to get The Report made for five years, and Burns noted that at one time the very serious subject matter — the movie revolves around the compiling of a Senate report on the activities of the CIA post-9/11, dealing with illegal acts of torture and other matters that were covered up — was actually going to be a comedy focusing on the two psychologists initially involved in the covert operations. However, when Burns met Daniel Jones, the man tasked with compiling the 7000-page report that was cut down to just over 500 pages, he knew he had to go in a different direction.

Burns said it all speaks to our current “crisis of accountability” that makes the story of the seeds of this scandal so relevant for today. Driver talks about his interactions with Jones and how that informed his performance, while Hamm, who plays President Obama’s chief of staff Denis McDonough, passionately describes how the process of making this report really shows government working in the best light in many ways.

To watch my conversation with them, click on the video above.