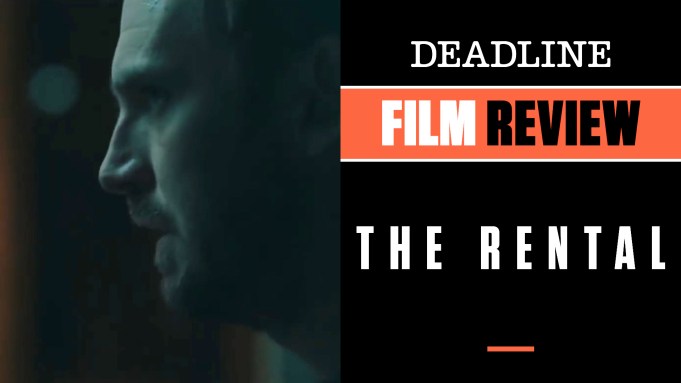 Dave Franco is also ambitiously looking for a career behind the camera as well, and with his sharp B-movie feature debut The Rental, he makes a good case for it. As a director and writer (here working with Joe Swanberg on the script) he isn’t quite on the level of Jordan Peele’s Oscar-winning debut with Get Out, which went well outside its genre to be a socially smart satire while genuinely earning its frights, but at least for its first 55 minutes or so of a tight hour-and-a-half running time, The Rental is actually an effective, foreboding, character-driven exercise.

That it ultimately caves and gives in to the tropes of your standard horror film is a little bit of a letdown for cineastes looking for the next Ari Aster-style discovery and instead getting something more along the lines of a Friday the 13th slash-o-rama. The tonal switch will probably please lowbrow fans, but there is enough style overall to mark Franco’s first big-league attempt with an “A” for effort.

Two couples use an app to rent a nice looking place for a weekend getaway. It looks real good on paper, and don’t worry about the creepy-seeming guy who oversees the place. His name is Taylor (Toby Huss), and he is really nothing more than a red herring as he explains he is just a facilitator for his brother, who actually owns the house situated in a nicely secluded and picaresque environment. Charlie (Dan Stevens, always reliable in whatever he does) and Michelle (GLOW’s Alison Brie, married to Franco in real life) are deep in a relationship, and in fact act more like a married couple than not. Josh (Shameless’ Jeremy Allen White) happens to be Charlie’s Lyft-driving and aimless brother trying to get his act together for the first time in his life by dating up with Mina ( Snowpiercer’s Sheila Vand), who also happens to be Charlie’s oh-so-close work partner.

The occasion for the weekend getaway is to celebrate their business. However, as we soon discover, it provides a little opportunity for Charlie and Mina to also celebrate their own simmering mutual sexual attraction after getting wasted on ecstasy and drinks and taking what they thought was an indiscreet romp in the hot tub, and a little later for some nooky in the shower as their significant others were supposedly sleeping. No harm, no foul except a wicked hangover in the morning, right? Well, the discovery of hidden cameras in the shower of this little rental paradise sends Mina into a tizzy for obvious reasons, and the fireworks begin as they try to get to the truth of who put them there, and for Charlie and Mina how do they get the tape before anyone finds out about their now-regretful half-night stand?

The internecine distrust boils over as the film hits high gear and our foursome finds their idyllic time together is more revelation than celebration. And on top of everything else Josh’s dog Reggie (Chunk) has disappeared. That however turns out to be the least of this group’s troubles as they are all about to face much bigger problems.

I really enjoyed the interplay between all of them, and buildup to the inevitable rather than the actual inevitable. For about an hour it is a nice character study given heft by a quartet of terrific actors. Brie is especially good, but all of them have moments including Huss, who manages to make Taylor just creepy enough to be suspect No. 1 but does a nice balancing act here. Being primarily an actor himself, Franco seems comfortable letting his talented cast do their thing so that when all hell does break loose, we actually care what happens to each of them.

The Rental had its “premiere” at a North Hollywood drive-in a few weeks ago and it seems the perfect summer tonic for those venues, in addition to being a perfectly fine rental itself when it hits VOD on Friday. Teddy Schwarzman, Ben Stillman, Christopher Storer, Elizabeth Haggard, Swanberg and Franco are producers of the IFC Films release.

Check out my video review above with scenes from the film. Do you plan to see The Rental? Let us know what you think.