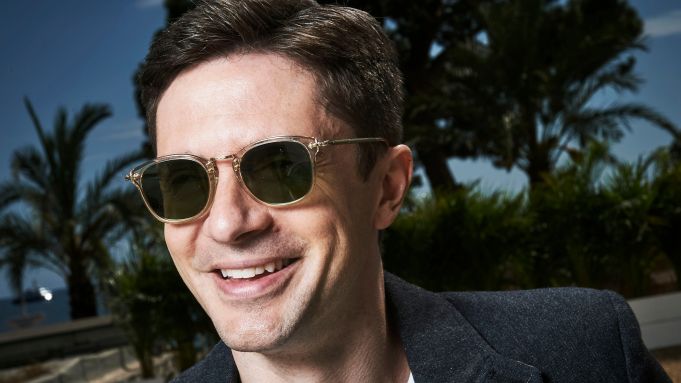 It’s rare for a Cannes first-timer to come to the festival with more than one project to promote, but that’s what Topher Grace has done these past two days, with roles in Spike Lee’s BlacKkKlansman and David Robert Mitchell’s Under the Silver Lake, the two American movies with competition berths this year. His turn in the latter is small, but all part of Grace’s grand plan to turn his attention towards auteur directors, he told Deadline at our Cannes Studio. It began when he signed on to Interstellar with Christopher Nolan, and has continued with collaborations with Drake Doremus, James Vanderbilt and David Michôd.

In BlacKkKlansman, the rewards of that refocus are most evidently displayed: as former Ku Klux Klan Grand Wizard David Duke, Grace is both frightening and frighteningly accessible, tapping into the image Duke projected that steered away from Klansman stereotypes, even as he maintained the vitriolic racism and anti-semitism at the group’s dark heart. He stars alongside John David Washington, who plays Ron Stallworth, a black Colorado Springs undercover police officer who successfully infiltrated the KKK, and met with David Duke.

The interview below, published in Deadline’s Cannes print magazine, took place before the festival. In the video above, after the premiere of BlacKkKlansman, Grace expands on his experience with Spike Lee and the darkness he found for his role.

In the past few years you’ve worked with David Michôd, James Vanderbilt and Christopher Nolan, and now David Robert Mitchell and Spike Lee. Has it been a conscious effort to work with these kinds of directors?

I think I’ve been trying to do stuff that is just really interesting to me, and to work with directors who are my personal favorites. Obviously someone like a Spike Lee is a no-brainer. I felt that way with David Michôd when I saw some of his stuff, so doing War Machine was great. And working on Truth with an amazing director and writer, and then also that cast, was special.

The sitcom [That ’70s Show] was great training, to do something in front of a live audience, but also it sets you up financially to put yourself in a place where you just don’t have to do something unless you love it. I’m tickled that these two things I loved happened to both fall at the same time.

In BlacKkKlansman you play David Duke. It’s a risky role to take on. Where did you start?

The role was really risky in the sense that it’s not even a little close to anyone I’ve ever played or ever known. He’s a guy who is full of hate. And worse, he’s really intelligent, which is what makes him really evil. You play bad guys, but you never really play truly evil people on screen.

The movie is adapted from book by Ron Stallworth, and the author really lived through this experience; he’s played by John David Washington in the film. When I read for Spike, I had to tell him how uncomfortable it made me, to say some of the things this man says. He was wonderful about it, and he was always great about making you feel safe.

When we did the table read, Ron was there, and he was there through filming too, and there’s no such thing as having too much information when you’re doing a movie like this. To have this guy who went through this come out and spend an hour and a half talking to us about his experience, it informs you more and makes you realize your responsibility. Not to this character, but to the audience, to be honest about it.

Are you able to switch off from a character like this at the end of a day?

I hesitate to say yes, because I hate it when actors admit to being so taken in by their own process; I don’t have that deep a process. But I would say this was the first time on a film where, in a specific scene, my character is leading a very specific ritual to a room of 100-200 people, who are following my lead, and I found it hard to deal with it because it was just so much hate. My character was the lightning rod for the hate; he was leading the people into doing it. I went to the monitors and sat down, and Spike came up and said, “Hey man, this is a movie. We’re doing this for a reason. Ultimately, what you’re feeling as a human being is what this movie is about.” I don’t know that there are many directors I’d be willing to go to a place like this with, but Spike’s the guy.

Describe the process of working with him.

He moves really quickly, and he knows exactly what he wants. When I was cast, that was very fast too. I don’t think actors love anything more than a leader that really knows exactly what they want, especially when you’re going into such dark subject matter; you don’t want to feel that your leader is anything less than 100% sure what they’re saying.

Spike always knows exactly what he wants to say, and we spent a lot of time rehearsing to get that across. We rehearsed at NYU, where he does such great work, and his students would come in to ask him questions while we were rehearsing. I always heard he taught at NYU, but you realize that’s why he stays so relevant, because he remains in touch with all these issues.

He really is a true artist, and I feel that way about David Robert Mitchell too. It’s right that these guys have their movies in Cannes.

You have a small part in Under the Silver Lake. What appealed about it?

As I said, I don’t just want to take a job, I want to go on a journey with a filmmaker, and Spike’s movie and David’s movie offered that. It is a very small part in Under the Silver Lake, but as you can tell from It Follows, and from the trailer, David is one of the coolest directors alive right now, so I was happy to be involved with him, whatever the role. It Follows felt like the birth of a new great filmmaker. This film, I think, confirms that.