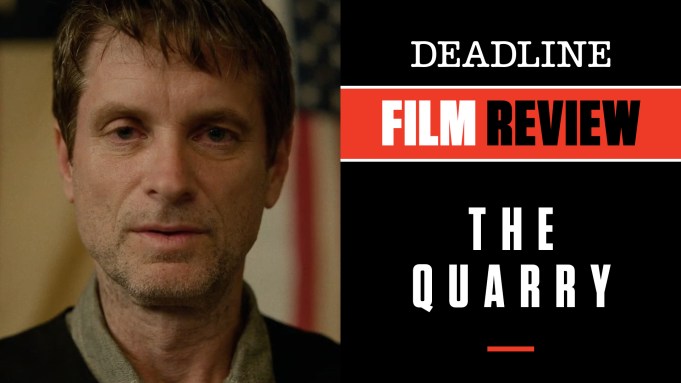 If you’re looking to find a quality new movie that actually feels like a genuine theatrical release, look no further than The Quarry, which pits two of our finest actors — Michael Shannon and Shea Whigham — against each other in a deliberately paced, atmospheric and compelling Texas noir hitting VOD this week. The film directed by Scott Teems and co-written with Andrew Brotzman is based on a 1995 Damon Galgut novel that dealt with the effects of apartheid in South Africa; for this adaptation, it has been set in a small border town in the Lone Star State, where the racism is still alive but in this case directed at Mexican immigrants.

The film opens intriguingly with visions of a building burning and a man who’s never identified by his own name (played by Whigham, most recently seen in Joker) seemingly out of it on the road when he is picked up by a passing van driven by David Martin (Bruno Bichir). As the conversation ensues, we learn the Mexican Martin is a traveling preacher headed to the town of Bevel to take over the church, one of many Spanish-speaking men of the cloth who have had the job. But when Martin asks too many questions of the stranger to his right, the man impulsively kills him, sloppily buries him in a quarry, and takes his van. This is the first 15 minutes of the film — all before the movie’s title finally rolls across the screen and the plot swings into gear.

The man adopts Martin’s name and passes himself off as the preacher, simply asking, “Where is the church?” There is only one in the town, and he settles in, getting a room from the landlady (Oscar-nominated Catalina Sandino Moreno) who has provided all the lodging for those who have come to serve the church in the past, even as she notes this guy seems different. On the first night, his van is broken into and burglarized by the brash young local drug dealer Valentin (Bobby Soto) and his brother Poco (Alvaro Martinez). The town lawman, Chief Moore (Shannon), meets the man identifying himself as David Martin due to this incident. As Martin sits across from him at the station, he notices a wanted poster with his picture on it for a crime of arson, something Moore doesn’t immediately pick up on.

The story rolls along in almost as sleepy a fashion as Bevel itself until a body is discovered in the quarry and, with all prejudices unmasked, Moore targets Valentin as the prime suspect. Meanwhile, the man posing as Martin clearly becomes more conflicted, revealing complexities not usually seen in this type of crime thriller. This is not a typical killer, and the mystery of how he came to this moment in his life is only shown in quick flashbacks — snippets that never satisfactorily give us a real picture of who he is, or was. It’s the one aspect of Whigham’s role that could have been fleshed out more, but it isn’t fatal.

Teems, whose previous narrative feature was the fine 2009 Hal Holbrook indie That Evening Sun, brings a refreshing sense of authenticity to this film, and Shannon and Whigham — who both co-starred in the HBO series Boardwalk Empire and share 2011’s excellent Take Shelter as a film credit — take it a few steps beyond the written page to really make it fly. Both are such accomplished artists, having worked with some of the greatest contemporary filmmakers, that you simply don’t see either one of them acting here. At the burial for the real Martin, the combination of exceptional writing and the performance between the pair make for a scene that could serve as a template for future films of this ilk. It is where everything, the entire cat and mouse game between them, comes to a perfect boil without ever calling attention to itself.

This movie blessedly is reluctant to succumb to the tropes of the genre. Both stars make it all seem easy, something only the great ones are capable of doing. I wish Moreno had more to do. She is a welcome screen presence and does well with what she is handed. Soto is a real live wire and plays a key role here, the importance of which cannot be discounted. He’s terrific. Props also to Bichir (brother of Oscar-nominated actor Demián Bichir), who makes the most of his brief screen time that kicks off the proceedings. Michael Alden Lloyd’s natural cinematography is aces.

Producers are Laura D. Smith Ireland and Kristin Mann. Lionsgate launches it on VOD and digital platforms Friday. Check out my video review with scenes from the film at the link above.

Do you plan to see The Quarry? Let us know what you think