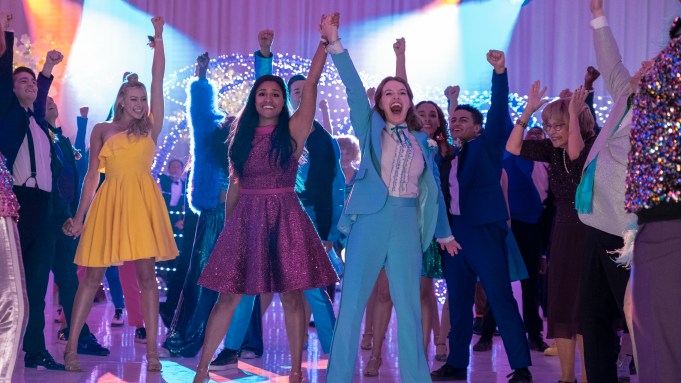 Netflix has dropped the teaser trailer first look at its big holiday-season musical The Prom, from director Ryan Murphy, who saw the original Broadway show early and immediately set about getting the rights and casting it with major stars for a screen adaptation that features none other than Meryl Streep, Nicole Kidman, Kerry Washington, James Corden and Andrew Rannells among others. The film version has a screenplay from original playwrights Chad Beguelin and Bob Martin, adapting the work that was nominated for seven Tony Awards in 2018 and won the Drama Desk Award for Outstanding Musical. Netflix plans an awards-season push for the film as well.

The plot centers on four Broadway actors who have seen better days who come up with a publicity opportunity to reignite their careers by flying to a small town in Indiana to help a lesbian student banned from bringing her girlfriend to the prom. For Murphy, the show was not only a vehicle to bring a big old fashioned movie musical back into the zeitgeist, but also one that had an important message that could make an impact.

On the occasion of this first look at what he has cooked up for his first movie musical ever (check out the teaser trailer above) the multi-Emmy winner and his two young stars hopped on the phone yesterday to tell why they are excited about bringing The Prom into the world.

“I saw the musical on Broadway in January and I went to my top casting choices of these household names Meryl Streep, Nicole Kidman, and Kerry Washington and James Corden. They instantly said yes because they loved what it was about,” Murphy said. “I thought this was great and I wanted to find two young women, and I think these parts are so important, not just a role but an ambassadorship, because they are going to bring hope and inspiration to young gay people all over the world, so I wanted to do it right.

“We spent six months, and I think we had over a thousand women audition for both parts. It was a long time.I looked at a lot of tapes. And when I got to Ariana’s and Jo Ellen’s I said that’s it. These are the two. My casting director asked if I wanted to bring anyone else into the room and I said no, I don’t. I said I was gonna roll the dice and pray that they had good chemistry. I got to meet them as they got to meet each other,” he added. “.. It takes awhile to get all the studio heads together to watch, but maybe it was about a week, but without question when everybody saw the tape from Ted [Sarandos] and Scott Stuber and everyone else involved we all said the search is over. It was like a Cinderella moment. It was a really fun process and I am so glad that it turned out the way it did.”

Jo Ellen Pellman plays Emma, the girl at the center of the story who is denied the opportunity to bring her girlfriend Alyssa, played by Ariana DeBose, to the prom. This is Pellman’s film debut; DeBose is on a hot streak right now, having completed her role as Anita in Steven Spielberg’s adaptation of West Side Story, as well as being familiar to Broadway audiences in the cast of Hamilton among other shows.

Both young stars joined Murphy for our conversation. Pellman still can’t believe this has happened to her.

“It was something out of your wildest dreams. I couldn’t have dreamed this. Meryl and Nicole and everyone was so welcoming, especially as a newcomer. It was my first time on a film set,” she said. “They were so gracious and made room for me. It was so indicative of the kind of people they are, not just as artists but they are really kind people. When I walked into the screen test and I saw Ariana’s name, my heart kind of stopped because she is a Broadway icon and I have admired her for years, and I was so excited to do this with her. We hit it off immediately and she has been such a great partner in crime ever since.”

DeBose was surprised to find herself in this kind of company. “I do love musicals. I am a musical theatre geek — they are ingrained in my DNA. I am so grateful to be put in this position to work with the best in the business,” she said. “Now I was not looking for The Prom, The Prom found me. And I am incredibly grateful to Ryan.

“I remember the moment I saw Jo Ellen I thought, ‘I think she’s it.’ I didn’t know if I was going to get the job but I was pretty sure she was definitely getting the job. I had the best time. What I loved about Jo and I as a duo, because we are a dynamic duo now, was that we could play and try anything. We were both newbies on a big film. Sure, I came from making West Side Story, but I’m sorry it is just not normal to walk on a set with Meryl Streep and Nicole and Kerry and all. It was so great to have someone to hold a hand all through it, and support each other and that’s what we continue to do. I am really proud of it and I think it really comes through in the film how much we love each other truly.”

Murphy says that, despite the pandemic and cinema shutdowns in Los Angeles and New York City, they are plotting some big-screen showings for The Prom around its December 11 premiere as well as benefits, including a couple for the Actors’ Fund. This is one of many films that Netflix had to adjust from a combined theatrical run and streaming attraction, but as you can see from the teaser it looks definitely like big-screen material.

Murphy is happy to get it out now when he thinks audiences could use a big lift.

“I just think it is a dark time. There is a lot of change happening in society, both good and bad,” he said. “When we were making the film, we started shooting  in December of 2019 before the world fell apart, but even then we thought this was optimistic, this was joyful, this was the mood we were feeling already and then it got darker and darker, and then we got closed down by COVID and had to figure out how to come back, ” he added, referencing the forced shutdown just three days shy of wrapping the shoot. “Musicals at their best are where you sing the words you can’t say. They are their own art form. We were inspired by movies like Singin’ in the Rain, old fashioned movie musicals.

Ultimately I think the mix of new actors and icons, and the cinematography, production design, costumes — it is like a big Valentine’s Day box wrapped present. That is the way I thought about it. It was a really good lesson inside the beautiful box. You open it up and there’s something in there. When Meryl saw it she called me, she said The Prom is a balm. This is like the prom that the world didn’t get to have this year in every single way, meaning a joyous celebration of something, and I thought she was right when she said that. I am just glad that Netflix figured out a way for us to finish this because I think it’s a celebration of everybody and everything, not just musicals but moviemaking. I am very proud it is coming out at that time. It is something I want to watch with my whole family. We have already watched it together once, and they keep wanting to watch it together again. We’ll watch it under the Christmas tree. The fact that my kids felt the same way about it that I do really means something to me.”