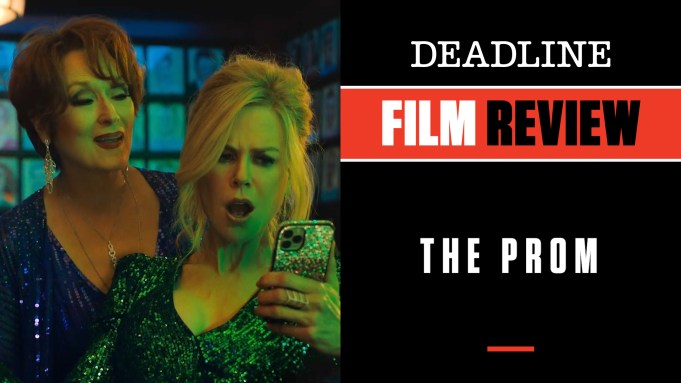 In what might be a land speed record for bringing a Broadway musical to the screen, Netflix’s holiday treat for lovers of the genre, The Prom, probably has set that mark. It took just two short years, including being shut down toward the end of filming due to the coronavirus pandemic, to bring this delightful old fashioned/new fashioned show from its opening night on the Great White Way to hitting movie theaters (those still open) and then streaming globally on Netflix.

I saw the show right after it opened and loved it; how it closed in less than a year I will never understand. I can say the same about Ryan Murphy’s film version, which is full of the same pizazz, style, spirit and heart. Add to that a killer cast including Meryl Streep, Nicole Kidman, James Corden, Kerry Washington, Keegan-Michael Key, Andrew Rannells and others, including winning performances from newcomer Jo Ellen Pellman and emerging star of Broadway and movies Ariana DeBose (Anita in Spielberg’s upcoming 2021 West Side Story).

During dark times, this kind of entertainment is probably more welcome than ever, and The Prom is a cause for celebration — a return to musicals the way Hollywood used to regularly turn them out in its golden era but one with real relevance for today. This is something that will light up your spirits in these gloomy times and put a smile and a little hope in our hearts just when we need it the most. I found it to be in a league with Broadway faves including How to Succeed in Business Without Really Trying and especially Bye Bye Birdie, the latter about some uptown showbiz types invading small-town America for their own PR purposes.

That is what happens here when a couple of self-obsessed actors, Dee Dee Allen (Streep) and Barry Glickman (Corden), hit the pits of their career after opening and closing on the same night in a disastrous musical of Eleanor Roosevelt’s life that turns off critics and audiences. Needing to do something to put the spark back in their careers, they join with a perpetual chorus player named, uh, Angie Dickinson (Kidman) and Trent Oliver (Rannells), a bartender/actor happy to land any role, and discover a way to get good press for themselves after spotting a little story about a teenage girl in Indiana who wants to take her girlfriend as a date for the prom but is not allowed to do it by school officials.

They take off for the small Midwestern town and get more than they bargained for as their PR cause becomes something much more to each of them, especially when the prom is “canceled” by PTA head Mrs. Greene (Washington) as a way to get around the bad publicity. Not only does what happens next change the lives of the young student, Emma (Pellman), and her girlfriend Alysa (DeBose), but also these New York actors, who learn a few lessons themselves. When I call The Prom “old fashioned,” it is because it brings back the joy of a genre Hollywood used to do so well on a regular basis, but its heart is firmly planted in 2020, where tolerance for one another’s personal characteristics is front and center in a story that has real meaning for contemporary audiences while it also exists as a singular and pure entertainment.

Of course, musicals are made for singin’ and dancin’ (Murphy cites Singin’ in the Rain as a particular inspiration for what he is going for here), and this production has that in abundance, with one dazzling number after another. Each of the stars is given ripe opportunity to shine. Streep, even at 72, continues to astonish in musical set pieces “It’s Not About Me” and “The Lady’s Improving.” Kidman — in her first big-screen musical since 2001’s Moulin Rouge! — again proves to have the chops, especially in her big solo “Zazz.” Corden, to no one’s surprise, nails “Barry Is Going to the Prom,” and maybe best of all is The Book of Mormon star Rannell’s rousing, gospel-tinged “Love Thy Neighbor” in an elaborate show stopper at the local mall. In fact, the film immediately gets off to a wow of a start as the four stars take over Broadway with the catchy “Changing Lives.” Pellman and DeBose also score in their big moments.

Among the supporting cast, there is fine work from Key as a supportive school principal, Broadway vet and three-time Tony nominee Kevin Chamberlin and brief but effective work from Mary Kay Place and Tracey Ullman in a couple of roles that were only talked about in the stage version but have an expanded presence here with two pros at the helm. The production values are first-rate down the line, and that includes magnificently re-creating Broadway in downtown Los Angeles. Check out my video review with scenes from the film at the link above.

The Prom opens Friday in a limited theatrical run and debuts December 11 on Netflix. Producers are Murphy, Alexis Martin Woodall, Adam Anders, Dori Berinstein and Bill Damaschke. Do you plan to see The Prom? Let us know what you think.