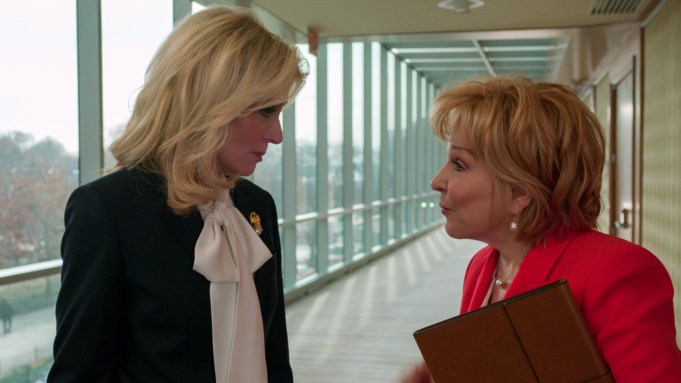 When Bette Midler says, “This is gonna be fun,” who are we to disagree? In this just-released teaser for Netflix’s upcoming Ryan Murphy series The Politician – the first look at Midler and Judith Light – politics does indeed look, well, fun. If a little deadly.

Premiering on September 27, the series – check out the first look photo of Midler and Light, along with their first teaser clip, above – is described as a one-hour “darkly comic” show featuring Ben Platt as Payton Hobart, a California rich-kid student who has known about his true nature since age 7: Someday he’s going to be President of the United States. And he gets more practice than anyone could want at Saint Sebastian High School.

Light plays Dede Standish, a longtime state senator running for re-election, and Midler plays Hadassah Gold, her chief of staff. We can expect them to cross paths with Payton, and from the looks of the teaser, Hadassah Gold is no one to cross.

The set up: In order to get elected student body president and secure a spot at Harvard, Payton will have to compete with – and outsmart – his ruthless classmates. If you’ve seen the earlier trailer Netflix released, you’ll now that Payton’s world is filled with some pretty ruthless adults as well, including mom (Gwyneth Paltrow) and the scene-stealing Jessica Lange as the cutthroat mother of a classmate. (Asked whether she thinks Payton should be killed, Lange first utters a shocked, What?, before adding, “Yes. Yes I do.”

Created by Murphy, Brad Falchuk and Ian Brennan, The Politician was picked up by Netflix in February 2018 and hails from Fox 21 TV Studios under Murphy’s overall deal at 20th Century Fox TV. He serves as writer, showrunner and executive producer, and frequent Murphy collaborators Falchuk and Brennan serve as writers and EPs.

Check out the original trailer, released last month, below: