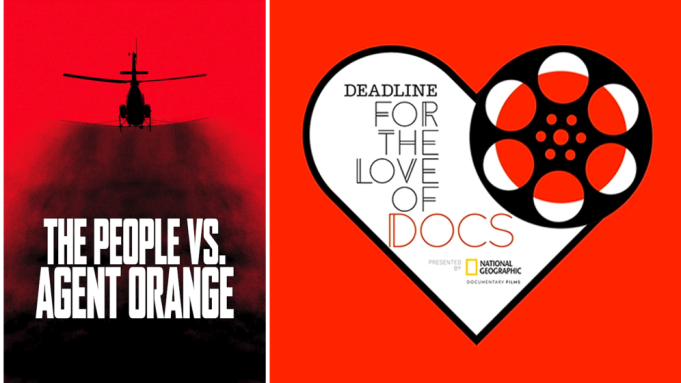 Most people think of Agent Orange as an “old” story. Yes, it was used in devastating fashion by the American military during the Vietnam War, defoliating the jungle. But that was a long time ago, right?

Even filmmaker Alan Adelson felt that way, until he met a woman at an event in New York who insisted he look at photographs of kids today in Vietnam who are living with the devastating effects of Agent Orange.

“She put her cell phone in my face,” Adelson recalled, “and showed me those painfully deformed children in Vietnam who have been born deformed because of exposure to Agent Orange, either by their parents or they themselves were exposed.”

Inspired by that encounter, Adelson embarked on his documentary The People vs. Agent Orange, which played as part of Deadline’s For The Love of Docs series.

“I didn’t want to make the film,” he said during a Q&A after the screening. “I thought it was a world with many new problems, and that’s an old problem. But the investigative journalist in me was saying if these poor suffering children resulted from human decisions, profit-making motives at the executive level of the chemical companies, then, indeed, making a film like that would be a cautionary tale that would help society in general.”

As the film reveals, not only were millions of gallons of Agent Orange sprayed over Vietnam during the war, the herbicide has also been used in this country.

“Many people are shocked and surprised to learn that these chemicals were brought back to the United States,” Adelson said, “and many of them are still in use today.”

One of the heroes of the film is Carol Van Strum, an ecologist whose own family was affected by the spraying of Agent Orange in the Northwestern U.S. Farm animals and a family pet were killed on her land after the spraying, and her four children were killed in a house fire of undetermined cause that occurred after she began investigating the origins of the spraying program. She amassed an archive of documents tracing the development of Agent Orange by Dow and other companies, and its use by the U.S. Forest Service.

“Strom was written up in an Intercept article in 2018 because she had just posted the Poison Papers online,” co-director Kate Taverna explained. “That’s how we found Carol.”

Another central figure in the film is To Nga Tran, a Vietnamese woman whose first child died as a result of exposure, through her mother, to Agent Orange. Tran has been campaigning for years to hold manufacturers accountable for their dangerous product.

“She always thought that it was her own fault… she lost her first child,” writer-producer Veronique Bernard said. “And it’s only when she was asked to participate in this court case that we follow in the film that she had her blood tested and she realized that she was indeed a victim and that dioxin [a chemical contaminant in Agent Orange] was still in her blood after all these decades.”

Bernard added, “They’re both extraordinary women,” referring to Tran and Van Strum. “I must say it was really gratifying to be making a documentary where the lead protagonists were not only women, but also septuagenarians. It’s not often that older women are sort of the leads in these stories, and that’s because they’ve been fighting for so many decades on both sides of the Atlantic.”

Both Tran and Van Strum have maintained a warmth and humanity despite all they have endured.

“It’s amazing to me,” Adelson commented, “that having suffered the tragedy… that Carol went through, the loss of four children in a fire of suspicious origin, and Madame Tran having gone through extraordinary torture and persecution because she participated in the liberation of Vietnam, that these two women hold on to such good spirits, are so generous and good-humored and caring… They’re kind of film sisters with one another. They’ve never met, except through the film.”

Watch the discussion in the video above. For The Love of Docs is sponsored by National Geographic.