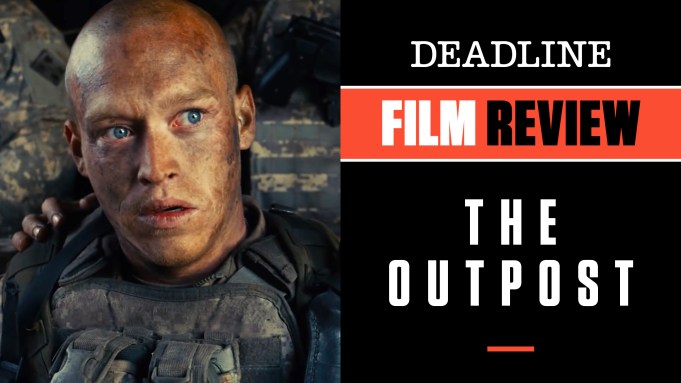 War movies have come in every stripe over the years — good ones and bad ones and in between — but I know the difference, and Rod Lurie’s Afghanistan-set The Outpost is top of the line. If exceptional works like The Hurt Locker and Dunkirk have defined what is good in the genre in recent years, this harrowing look at the 2009 Battle of Kamdesh belongs right in that conversation.

If ever there was a movie that cried out for a run in theaters, it is this one, with impeccable sound and cinematography (by Lorenzo Senatore), but unfortunately the coronavirus pandemic has altered those plans. Although distributor Screen Media hopes for some theaters around the country, it is headed to VOD on Friday. Originally The Outpost was to have premiered at South by Southwest, and then as a nationwide Fathom event, but real life intervened.

Real life, and the horrors of war, is the order of the day here too as Lurie and his screenwriters Paul Tamasy and Eric Johnson adapt CNN anchor Jake Tapper’s 2012 bestseller The Outpost: An Untold Story of American Valor. Now, thanks to his book and the gripping movie Lurie has fashioned, it no longer is “untold.”

It chronicles the story of perhaps the bloodiest battle in the seemingly never-ending Afghanistan War, in which a unit of about 53 soldiers was put in an impossible position that they never should have been subjected to at a place known as Combat Outpost Keating. Surrounded by three steep mountains, it became a shooting gallery when 400 Taliban emerged to take on the Americans basically trapped there.

Jake Tapper Talks About ‘The Outpost’ And What It Says About The Ongoing U.S. Mission In Afghanistan: Q&amp;A

Orlando Bloom plays First Lt. Benjamin Keating, the commander in charge who gets orders to close down the position, but first they have to move out a heavy truck so it can be put to use elsewhere. It becomes a treacherous assignment, and the soldiers also weren’t told of impending plans to abandon the outpost. Before that can be done, all hell breaks loose when they are attacked.

The second half of the two-hour film is devoted almost entirely to the horrendous battle that ensues. In some ways, it echoes the fight for the Alamo, a last stand for brave men in an impossible situation. The sheer art of the filmmaking here is exceptional, with Lurie opting for long continuous takes that put us right in the middle of war. It is a very effective technique that thankfully doesn’t call attention to itself, but almost gives the movie a documentary feel.

It helps that Lurie has cast the movie so well, with Bloom, Scott Eastwood as the swaggering and courageous Staff Sgt. Romesha and a standout performance from Caleb Landry Jones as Specialist Ty Carter. Romesha and Carter received the Medal of Honor, but the whole Bravo Troop 3-61 unit should have as well. Among others in the cast are some of the real-life participants in the battle including Henry Hughes and Daniel Rodriguez, a nice touch lending further authenticity to the film.

Interestingly the movie has several actors in it whose last names you might know including Eastwood, son of Clint; James Jagger, son of Mick; Milo Gibson, son of Mel; Scott Alda Coffey, grandson of Alan Alda; and Will Attenborough, grandson of Richard. Lurie himself has a military background and went to West Point, and clearly his goal here is to honor the warriors put into a hopeless hell hole to which they should have never been subjected. The circumstance putting this unit there were shameful, but Lurie’s focus is on these soldiers giving it all they got, and doing it with honor. This film honors them. I guarantee that for the last hour you might forget to breathe. A must see.

Marc Frydman, Jeffrey Greenstein, Paul Merryman, Les Weldon, Jonathan Yunger and Tamasy are producers of the Millennium production. Check out my video review at the link above with scenes from the movie.

Do you plan to see The Outpost? Let us know what you think.