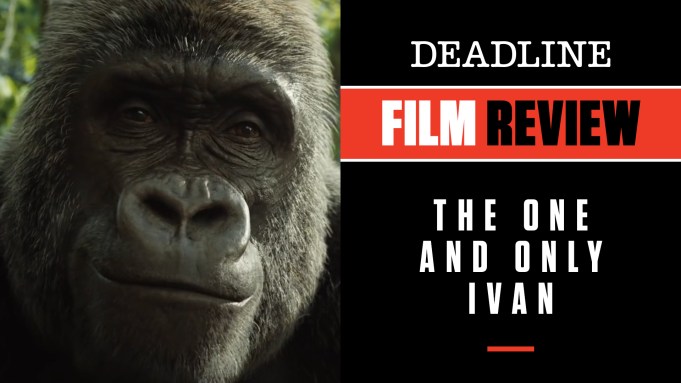 The One and Only Ivan just might be the summer’s nicest surprise, and for families looking for entertainment with actual warmth and worth, look no further.

Much more than the recent overblown attempt to resurrect Dolittle and the talking menagerie that spoke to him, the creatures in this wonderful adaptation of Katherine Applegate’s Newberry Award winning book just kinda talk amongst themselves while performing in a ragtag animal circus set in a corner of a mini shopping mall. It is inspired by a true story about a gorilla that became a star attraction in a similar-type show in a mall and never saw the outside of it for 27 years until protesters got him freed.

This has all been Disney-fied, but I say that in the best sense of the word. It is not cloying, fake or reaching for laughs but actually perhaps closest in spirit to the 1995 Best Picture Oscar nominee Babe. In fact, this is the best live-action talking-animal picture since that classic came our way a quarter-century ago. If that sounds like limited praise, it isn’t. This is the real deal.

Storywise, Bryan Cranston’s Mack is owner and ringmaster of a small tented circus (of sorts) in which the animals are all-stars and have been doing their act for decades to now-dwindling audiences. Mack and his wife brought up Ivan, his star gorilla, from just about the time he was born, and Ivan (voiced with real poignancy and world-weariness by Sam Rockwell) is like a veteran pro who knows how to entertain; by his own count, he’s done the show over 9,000 times. Offstage he trades barbs and thoughts with his co-stars, including aging elephant headliner Stella (voiced by Angelina Jolie, who also was a producer), along with a preening chicken (Chaka Khan), a bunny, a seal named Frankie (Mike White, who also adapted the book for the screen), Mack’s poodle (Helen Mirren) and a mutt who keeps turning up surprised that everyone calls him Bob (Danny DeVito).

Into this world — out of necessity in order to stay afloat, according to Mack — comes a new star in the form of a baby elephant named Ruby (The Florida Project’s Brooklynn Prince). She immediately steals the show and the spotlight, but Stella, knowing the confined world she’s being made part of, exacts a dying promise from Ivan that he will make sure she doesn’t have to live the life he has in captivity all these decades. Ivan makes that promise, and therein lies the rest of the story as the animals attempt to experience freedom.

Sweet, funny and moving, the film from director Thea Sharrock never misses a beat or talks down to the kid audience that ought to respond nicely not only to this as much-needed end-of-summer-but-still-stuck-in-a pandemic entertainment but also one with a necessary call to save animals from a life of captivity not of their own making. This is not to say this is one of those shows where the humans are villainous exploiters. Cranston is too good an actor to play the heavy here. He’s compassionate but also is dealing with his own realities of business. There’s real poignancy and human kindness in his relationship with Ivan. There’s also a very satisfying ending and a nice end-title Diane Warren tune called “Free.” Among the human actors onscreen, Ramon Rodriguez as George, Mack’s sidekick, is nicely cast.

This originally was planned as a theatrical release for mid-August, but things obviously changed. It debuts Friday on Disney+, and it is a standout on the service — a must-see for family audiences. Producers, in addition to Jolie, are John Flanagan, Brigham Taylor and the late Allison Shearmur, to whom the film is dedicated. Check out my video review at the link about with scenes from the movie.

Do you plan to see The One and Only? Let us know what you think.